ACEMS associate investigator Adam ‘Ben’ Rohrlach loves history. He gets to use statistics to contribute to research that shows how people thousands of years ago moved and settled in different places around the world. Some of the stories of these journeys are quite remarkable, but the story of Ben’s journey to where he is now is also pretty remarkable.

Just a few short years ago, Ben was a full-time chef at a restaurant in Adelaide. Fast forward a few years, and now he’s a postdoctoral researcher at the Max Planck Institute for The Science of Human History in Jena, Germany. 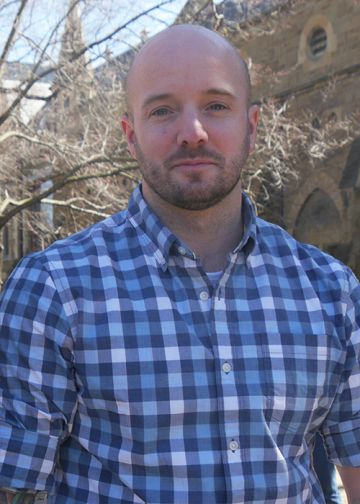 “I've always had an interest in the distant past. I'd watch documentaries on anything from the origins of life, to the age of the dinosaurs, up to medieval human history,” says Ben.

“To live in Europe is quite strange for an Australian. From where I live, other countries, cultures, histories, cuisines and sights are only a short train ride away,” says Ben.

In 2009, Ben left the restaurant to return to Uni. He enrolled in a maths degree at The University of Adelaide, where he eventually got the opportunity to work with ACEMS Chief Investigator Nigel Bean and ACEMS Associate Investigator Jono Tuke.

“During a summer research scholarship project between the second and third years of my undergraduate maths degree, I kept telling Nigel and Jono dinosaur facts every day until they'd finally had enough. They took me over to meet the people over at the Australian Centre for Ancient DNA (ACAD). It was there that my Masters project began to get planned out,” says Ben.

In 2017, Ben was one of the lead authors of an ACAD-led paper published in Nature. This group research project used genetics, backed up by statistics, to link groups of Aboriginal Australians to their ‘country’ for the last 50,000 years. The project would go on to the win the 2017 Eureka Prize for Excellence in Interdisciplinary Scientific Research.

Ben’s work with ACAD introduced him to a gifted researcher named Dr Wolfgang Haak. Dr Haak left ACAD to become a Principal Investigator at the new Planck Institute for The Science of Human History.

“Wolfgang and I had enjoyed working together on a couple of projects at ACAD, so he encouraged me to apply for a post-doc position in his research group. I was lucky to get it, so I moved here in January 2019,” says Ben.

Ben is already making an impact. In the past month alone, three significant papers that have been published list Ben as a co-author. The papers appeared in:

In all three publications, the research teams brought Ben into their projects for his statistical expertise to help support or strengthen the research findings.

“I have my own projects that I'm working on, but I'm fortunate because I get to be involved in other people's projects ‘on the side’, and see some amazing data, stories and research,” says Ben.

“In some of these cases, researchers will have a specific research question that they feel a trained statistician can answer. In other cases, conversations can start during our weekly research meetings, where another researcher is describing their project, and I, or someone else, might notice a question that we can help with, or an analysis we could strengthen, and it just sort of leads from there.”

Ben says his time with ACEMS in Adelaide really helped him prepare for where he is now.

“The ACEMS model of inter-node activity showed me the strength of group research projects involving large numbers of people, something perhaps you don't see as much within a single university,” says Ben.

“More importantly, the Centre brought together some of the best researchers in our fields, sometimes in the same room. What an opportunity to be able to talk and learn from them.”

“One of the great things is the bringing together of geneticists, like me, with archaeologists, linguists and methods developers in the same institute. To have this melting pot of researchers in one place helps to develop an amazing research environment,” says Ben.

What a journey, so far, for Ben. We can’t wait to see where it takes him next!

RESEARCH BRIEFS FROM BEN FOR THE THREE PROJECTS SHOWN ABOVE: