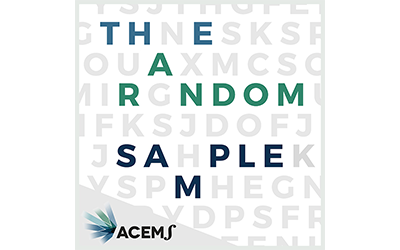 Welcome to The Random Sample

We hope The Random Sample will give you a unique glimpse into the world of mathematics and statistics, and how these sciences play such a crucial role in so many areas where you wouldn't expect.

You'll meet some fascinating people along the way and get the chance to know some of our researchers. Enjoy! (just click on the episode number to take you to each individual podcast)

Subscribe and listen to the podcast for free on:

The closest thing to a crystal ball that many organisations and businesses have to look into the future is what’s called a forecast. Not for weather, but for so many other things like product sales, or unemployment figures, or energy usage.

In this episode, we get a glimpse into how forecasting works and how it continues to develop.

How do you know if a new drug will do what it claims to do? Or a new policy will have a desired effect on a population? Many experts believe the best way to answer questions like those are to use 'randomised trials'.

In this episode, we explore why and how randomised trials are used, what happens when they're not, and how they might be used even more in Australia to drive decisions and policy.

In the build up to the COVID-19 pandemic, hospitals started preparing for the worst. On a normal day, they operate at or around 100 per cent capacity. But in the past few weeks – during this pandemic – something strange has happened. Those numbers have dropped. But why?

In this episode, we explore that question, and also look at why ACEMS researchers are closely tracking hospital emergency department data.

In the search for clues in tracking the presence or spread of COVID-19 in communities, sometimes experts need to look in some spots they'd rather not. Australia's Chief Scientist is mobilising a team to look for such data in the dirty wastewater that leaves homes and businesses every day.

In this episode, we explore why that data could provide important information on what's going on with the pandemic in Australia.

How well do social distancing measures work when it comes to controlling the spread of COVID-19? Which ones can we start to remove? And when? The problem with these questions is time. It takes days, even weeks to see if a certain measure or measures are working.

In this episode, we introduce you to a project called 'Safe Blues'. Its aim is to provide a way to get these answers in a more real-time fashion, by tapping into the power of your mobile device.

Patricia Menendez is on a mission to get more girls and young women interested in maths and stats. In late 2019, that mission to took her to Antarctica!

In this episode, Patricia talks about the voyage to one of the most remote places on our planet, and how she hopes to use it in her outreach efforts.

Episode 23: The Maths Behind Mining the Blockchain

Chances are you’ve heard of bitcoin – or blockchain – or both. But what are they? How did they start? And what does their future look like?

In this episode, we explore those questions and look at how, mathematically, this topic is really a rich source for some really interesting problems and solutions.

Every two years, AustMS and AMSI choose a prominent mathematician to tour Australia. This year's Mahler lecture series speaker is Dr Holly Krieger, originally from the United States, but now at the University of Cambridge.

In this episode, Holly talks about her research, her outreach to female students and young researchers, and her tour of Australian universities.

Episode 21: A Chat with Hadley Wickham

The world of data science has seen a massive explosion of interest in the last decade. It’s more important than ever before to be able to handle data, work with it, visualise it and find the meaning in it.

One man who is helping hundreds of thousands of people do just that – is statistician Hadley Wickham. Hadley is now the Chief Scientist at RStudio.

In this episode, Hadley talks about his groundbreaking work, and shares his journey on how he got to where he is now.

How do we find the stories that are hidden inside of statistics and data? And how can we better communicate those stories?

In this episode, we meet the co-creator of the "Stats and Stories" podcast. We explore the challenges, opportunities and importance of communicating statistics, especially in this data-driven world that we live in.

Episode 19: Playing the Game of Maths

What if we could change the way a lot of students feel about mathematics?

In this episode, we introduce you to ACEMS' flagship outreach program, MathsCraft, which is designed to supplement what is already being taught in classrooms. MathsCraft allows kids to experience things like the creativity of maths, collaboration, having ideas, exploring those ideas, and coming up with new ideas and questions.

How many beds should a new hospital include for its intensive care unit? Not enough is bad for those who need the care. Too many is bad for the hospital, especially cost-wise.

In this episode, we explore how maths can be used to explore the problem and others like it. It’s also a fascinating example of how maths can reveal a lot about what’s happening all around us!

Episode 17: A Day Can Make a Difference

In May 2019, there were more than a dozen "Women in Maths" Day celebrations around Australia. Maybe the biggest event was in South Australia. In this episode, we talk to three of the women behind that big event, what they did, why it was so important, did anything come of it, and what's ahead when it comes to the issue of gender equity in mathematics.

There's no denying the popularity of the Marvel Cinematic Universe (MCU) - and all the movies that are a part of that franchise.

In fact, it's the most popular movie franchise ever.

But what if you could use maths to help explain the popularity of the MCU? That's just what we do in this episode!

Episode 15: Weighing Up Evidence in Criminal Courts and at a King's Burial Site

Few things have changed the legal system over the past few decades as much as the use of forensic evidence – most notably, DNA.

DNA evidence can provide powerful evidence in support of a person’s guilt – or innocence. The key, though, is making sure it’s used and interpreted properly.

In this episode, we explore the use of statistical genetics in the legal system, and in identifying the remains of a medieval king.

Episode 14: Matilda to the Rescue

The role of algorithms can’t be understated in the technological world we now live in. For example, they help dictate the search results and ads we get online and help us get from place to place. Plus, businesses and governments rely on them more than ever to help make critical decisions.

Space junk and micrometeoroids present serious problems for any satellite or ship that ventures into earth's orbit. While we don't yet have graviton-based deflector shields like in Star Trek, there are some shield technologies that we use today to protect the craft.

In these two episodes, we talk about the problem of space junk and some of the maths and stats models that are used to predict the effectiveness of a shield.

In this episode, we explore an innovative project designed to help the Great Barrier Reef. It's called Virtual Reef Diver, and the project was named by ABC Science as its 2018 Citizen Science Project for National Science Week. The best part of the project is that you, or anyone in Australia or around the world, can help with the project from the comfort of your home or office.

In this episode, we look back at the life of Helen Newton Turner, an Australian statistician and a statistical genetist who made some amazing contributions to science starting in the 1930s and spanning over a 40 year career.

Helen started off as a secretary, and worked her way up to become an accomplished statistician, principle scientist and world-renowned leader of CSIRO's program in sheep breeding research.

​Imagine your life without a mobile phone or WiFi. It wasn't that long ago that we didn't have either of these things.

In this episode, we chat with ACEMS Chief Investigator Matt Roughan about the fascinating concept of information theory, and how we got from morse code - all the way to where we are now.

Women make up less than one-fifth of the STEM workforce in Australia. But in this episode, we chat with three women who are doing what they can to help change those numbers, by the work and research they're doing. We discuss with them their different sciences, the importance of maths in their work, the challenges women have faced in the STEM workforce over the years, and why it's important to have women role models in STEM. Among the women we talk to is the President of Science & Technology Australia, Prof Emma Johnston. (pictured left)

Prof Louise Ryan is one of ACEMS Chief Investigators, and like many of ACEMS’ CIs she has had an amazing career of unlikely and unplanned opportunities.

In this episode, we chat with Louise about her career and what advice she has for PhD students and early career researchers.

Why aren't there more women in maths or STEM? What's being done about that, and why is that so important?

In this episode, we chat with one of Australia's best known mathematicians, Prof Nalini Joshi from The University of Sydney, as she talks about why a maths education is more important than ever before.

Episode 5: Can you really be a mathematician?

According to CareerCast.com, five of the top 10 jobs require skills that are maths-related.

In this episode, we explore whether the ways maths is taught needs to be changed to attract more students into maths to meet the demand for these jobs. We also talk to a woman who has made maths her career, and no one is more surprised about that than her!

Episode 4: Should you believe what the survey says?

When you see or hear news stories about the latest poll, or what conclusions have been drawn from one survey or another, it's easy to take that information at face value. But should you? Should you be more skeptical about the conclusions these claim to show us?

In this episode, we look at how surveys work, why we need them, and what you need to look out for before you're convinced.

Episode 3: How to get from a dog to DNA in two short steps

How does your phone or computer know the word you're trying to type and autocorrects you? How do online shops suggest books or other items for you to buy?

In this episode, we explore the concept of distance and how it can be used in places you wouldn't expect.

In 1960, an Australian mathematician named AG Doig co-authored a seminal paper in the field of linear programming. This highly-cited paper created a tool that allowed computers to do something they were uniquely good at: solving optimisation problems. What no one knew at the time was that AG Doig was a woman!

In this episode, we chat with AG Doig, or as most people know her now, Alison Harcourt, about her life as a mathematics pioneer in Australia.

Episode 1: What do you win when you gamble?

How likely is it that you'll win big by playing the lottery, poker machines, or casino games?

In this episode, we look at gambling from a mathematician's point of view. The numbers will surprise you!