The study, published today in the journal Nature, uses genetics to help link Australian Aboriginals to the land that they have always claimed through their stories. 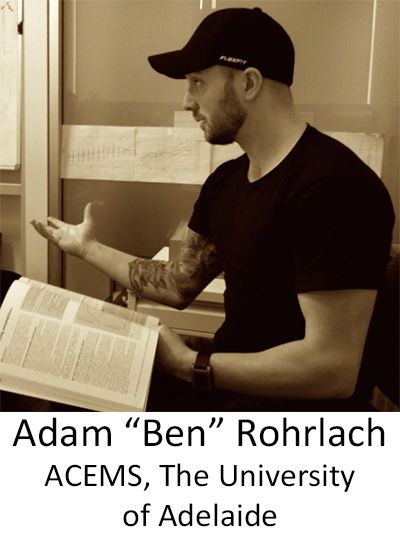 Adam “Ben” Rohrlach is one of the lead authors in the study, after he was able to develop the necessary statistical methods for exploring the genetic data used in this study.

Essentially, the study looks at the ‘phylogeography’ of Aboriginal Australians, that is, their genetic and geographic structure.

The phylogeography in this study agrees with the notable Aboriginal Australian cultural attachment to their country. In fact, evidence from the study shows the continuous presence of Aboriginal populations in discrete geographic areas dating back some 50-thousand years.

This means that when a group settles in one area, that group pretty much stayed there. In other words, the genetics show there really is a tie between who you were as a pre-European Aboriginal person on the land, and the land itself. Even if regions became uninhabitable during dry spells brought on by ice ages, the same groups seemed to return to their ancestral lands. 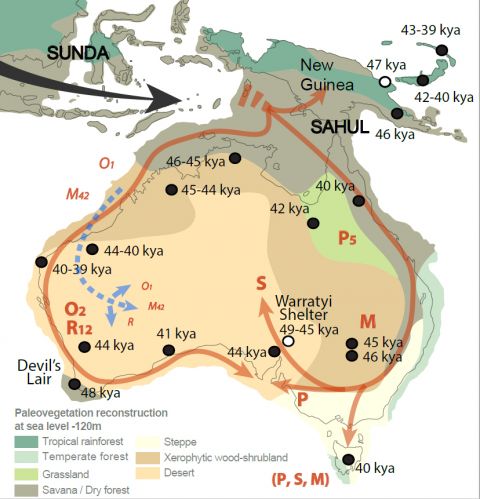 The Peopling of Australia. Model of the peopling of Australia combining genetic and archeological data, showing approximate, and stylised, coastal movements of haplogroups O and R (West) and P, S, and M (East). The inferred movement of S into the interior is influenced by the path of a recent study on water sources and human movement. Data from other studies where pre-European distributions are unclear are indicated with a dagger (†), and include a potential late-glacial movement into the Western Central Desert region (blue dashed arrows, see methods). Early Archeological sites in Australia and New Guinea (black dots) are given with mean ages for earliest occupation of sites in each region (supplementary table 4). Insufficient data were available for sites with white dots, which were not used in the age model for the initial Sahul colonization date but provide independent age controls. Ages in Southwestern and South Central Australi, at Devil's Lair (49–46 KA) and Warratyi Rock Shelter (49–45 KA), suggest that the overall population movements were rapid and that the coastal regions of Australia were colonized within a few thousands years. Approximate late Pleistocene vegegation reconstructions are shown.

The study suggests that the fact these individual populations stayed in roughly the same area for tens of thousands of years may explain their remarkable cultural attachment to the land.

The Genetics, or DNA, used in the study:

The DNA used in the study comes from hair samples that were collected by two anthropologists in the first half of the 20th century. Interestingly, the anthropologists recorded detailed genealogical histories for every one of the hair samples collected from an individual, including the location of their grandparent’s birth place. No other Aboriginal data set in the world has this sort of detailed information predating the European resettling of whole communities. Until recently, though, the genetic information wasn’t known to be there.

Researchers from the Australian Centre for Ancient DNA (ACAD) spent the past three years sequencing the Mitochondrial DNA (mtDNA) from the samples. Mitochondria are the powerhouse of cells and mitrochondrial DNA is inherited maternally, unlike the rest of the DNA in the nuclear genome. Since this genetic information can only be passed on by mothers, it follows the history of the female part of the population (hence its popular name, the “Eve gene”).

The University of Adelaide Media Release on Implications of the Study

The researchers were able to take the sequenced mtDNA and assign individuals to haplogroups: a group where there are unique markers (mutations) on the genome, which mean they share a more recent ancestor than someone without that special marker. They were then able to plot these groups on a map of Australia to show that individuals that were genetically similar seem to be clustered together geographically.

Ben Rohrlach says his research strengthened the results of the study.

“What they were missing was a rigorous hypothesis test,” Ben Rohrlach said. “We took their genome data and basically turned it into numbers.”

Ben says methods existed for these sorts of analyses for DNA where we have two copies (one from each parent). He says he and his group at ACEMS at The University of Adelaide found a way to modify the methods to mtDNA where there is only one copy. They used a statistical data analysis technique that was originally developed for survey analysis, called Multiple Correspondence Analysis (MCA).

Ben is currently working on his PhD with ACEMS at The University of Adelaide, under the supervision of ACEMS Deputy Director and Chief Investigator Nigel Bean and ACEMS Associate Investigator Jonathan Tuke, who are also listed as authors of this study.

“I really hope further work continues to strengthen the body of evidence we're starting to put together here, as we've only just started. We really need to make people aware of the importance and richness of Aboriginal and Torres Strait Island culture so that it can be appreciated and respected for its uniqueness. They have such an interesting history, and one which we're only beginning to uncover,” Ben said.

Ben has recently been appointed as an Associate Lecturer in Statistics and obtained his Master of Philosophy degree in Mathematical Sciences at Adelaide in 2014.