The power of mathematics: Using statistics to fight bushfires

There are about 50,000 bushfires every year in Australia, according to a 2009 report by the Australian Institute of Criminology.

For many Australians, this number is probably not that surprising. What is more surprising, though, is that mathematicians may have a key role to play in fighting these fires.

One of these fire-fighting mathematicians is Dr Sevvandi Kandanaarachchi – a postdoctoral fellow and Associate Investigator at ACEMS. She works closely with Professor Kate Smith- Miles, one of ACEMS’ Chief Investigators.

But what’s the connection between maths and bushfires? And what inspired Sevvandi to apply her mathematical expertise in this area?

To answer this, we need to rewind to May 2017, when the Victorian Government’s Powerline Bush Safety Program (PBSP) launched a Vegetation Detection Challenge. The goal was to develop an algorithm that could be used to assess the risk of a bushfire igniting as a result of vegetation coming into contact with a powerline (for example, a branch falling onto an electric cable).

Sevvandi’s imagination was captured by this interesting challenge, and she worked with Dr Mario Munoz Acosta (an ACEMS Associate Investigator at The University of Melbourne) and Priyanga Talagala (a PhD student at Monash University) to respond to it.

As Kate explains, the challenge was a great opportunity for Sevvandi, Mario and Priyanga to develop their mathematical skills and apply them to real-world problems.

“One of the main objectives of ACEMS is to grow capacity for the future,” Kate says. “We have a fantastic cohort of postdoctoral research fellows and PhD students, and I was very enthusiastic to see Sevvandi and the team use their mathematical skills to engage with such a critically important challenge as bushfire prevention.” 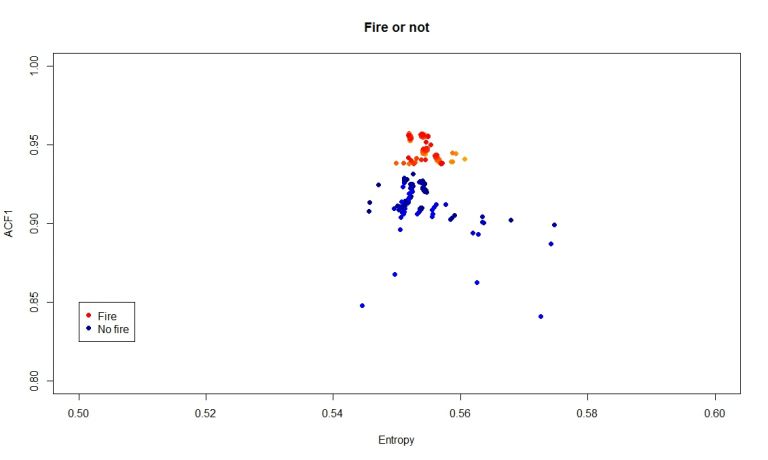 Representation of fire risk with selected features: Autocorrelation of first order with the Entropy of the signal.

Previously, Sevvandi’s research had focused on finding anomalies in high volume streaming data, with applications for detecting intruders in a security context. So it was exciting to think that the methods she and the team had developed could be extended to something as far removed from this as bushfire prevention.

Using a data set that had been collected by the PBSP – which contained a vast number of photos, videos, test logs and reports on bushfires caused by powerline faults involving vegetation – Sevvandi, Mario and Priyanga created three different mathematical models to assess the risk of a bushfire igniting.

Mathematical modelling is basically a process that uses maths to analyse, predict and provide insights into real-world phenomena, such as bushfires. Almost anything in our lives can be modelled, enabling researchers like Sevvandi, Mario and Priyanga to uncover important patterns and help solve big problems.

“Our first model detects a branch on a powerline and creates an alert,” Sevvandi says. “If the branch continues to be on the powerline for longer than a certain amount of time, then the alert is escalated to an alarm. The second model is a visual method to help ascertain the risk of fire, while the third model predicts the fire risk as high or low using a different algorithm.”

Using the three models, the team successfully identified certain characteristics that can be used to predict the risk of a bushfire – and they correctly predicted the bushfire outcomes in their sample data set. In recognition of their success, they were awarded second prize in the PBSP competition.

This is an achievement to be proud of and the team’s research could have far broader implications going forward. Their algorithm is not only applicable in Australia, but also in other countries where bushfires happen. It’s exciting to think that their mathematical prowess could be used to save lives and protect biodiversity by preventing the spread of devastating bushfires.

As for Kate, she is delighted with the team’s accomplishment: “As a supervisor,
it is always special to realise that you have helped train independent researchers who generate their own successes,” she says. “This is the legacy that ACEMS is trying to create – a new generation of mathematicians who have the knowledge, skills and confidence to tackle some of society’s greatest challenges with the power of mathematics.”