How popular are you on social media?

According to a theory known as the ‘friendship paradox’, the answer to that question is: not as popular as your friends. This paradox basically states that friends of individuals tend to have more friends than the individual him/herself.

But fascinating research by the statistician Dr Lewis Mitchell has called this theory into question. Lewis is an Associate Investigator at ACEMS and a lecturer at The University of Adelaide. His work uses statistical tools to give meaning to friendships and networks on social media. He is interested in the extent to which we can make predictions about what individuals choose to write and share on social media, based on their social ties. 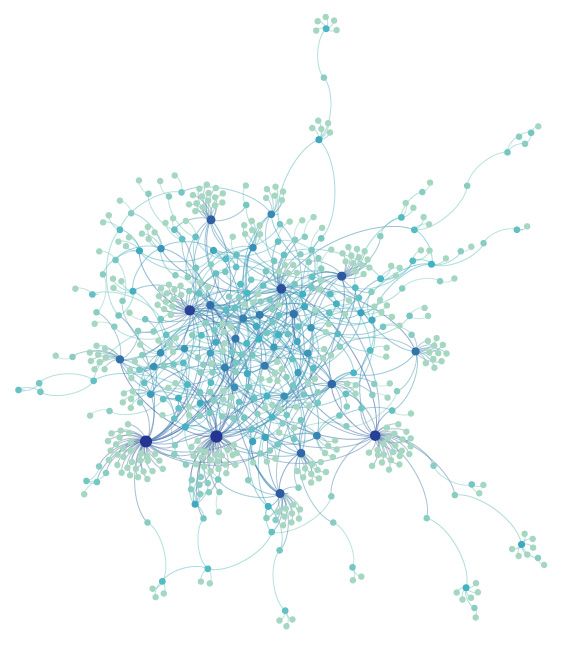 A graphical representation of a social network constructed from discussion on Twitter.

In an age of political uncertainty and polarisation, we’ve all heard of online ‘echo chambers’ – namely, that social media users are more likely to engage with those that share their political views. Lewis is primarily interested in finding out how these echo chambers develop. But first, he needs to understand how information flows on social networks – and that is where statistics comes in.

“A great thing about the current age of ‘big data’ is that we have mountains of information about the thoughts and feelings of people over time,” Lewis says. “We’ve been collecting data from Twitter and constructing timelines of the things people have written. From this, we can quantify the information that’s shared between different people, using classic mathematical tools borrowed from information theory.”

Because social media gives us information about the timings of the various things people write, Lewis and his team have been able to analyse how much an individual’s friends influence what they write.

“We found that an individual’s social circle contains predictive information about them,” says Lewis. “That is, in principle, it’s possible to predict the things you are going to write about based on what your friends have written before you.”

But Lewis also found that not all of your friends are equal. Perhaps unsurprisingly, your closest friends (defined as the individuals you contact most frequently) seem to have more influence over you than your distant friends. The extent to which they can be used to predict what you’ll write next is extraordinary – in theory, Lewis’ research suggests that your 12 closest friends contain just as much information about your future writings as your own past history.

The team also found out something new about the so-called friendship paradox. While it is a widely held belief that your friends are more popular than you are, Lewis’ research results strongly suggest that the closer your friend is, the weaker the friendship paradox is.

Intriguingly, this finding may also have implications for the offline world – specifically, in the field of health research. As Lewis explains, there is a vaccination strategy called ‘acquaintance immunisation’, which exploits the friendship paradox by distributing vaccines and asking people to give them to their friends.

“Our findings suggest that if your closest friends are ‘famous’, this method is effective at making the vaccine use spread faster and thus the disease spread slower,” Lewis says. “But the flaw is that your closest friends are less likely to be ‘famous’, meaning that people with the most influence are less likely to be immunised – so it may not be as effective as hoped.”

For now, Lewis is enjoying the fact that his latest piece of research has been successfully submitted for publication. He carried it out in collaboration with James Bagrow, an Assistant Professor at the University of Vermont.

Going forward, Lewis is excited about the directions his research will take. He is keen to continue using the power of statistics to explore how information is transferred on social media and to gain a deeper understanding of how online filter bubbles and echo chambers develop.