Bitcoin’s future looks bright, but is the technology up to the task?

Interest and investment inthe cryptocurrency Bitcoin has skyrocketed in the last few years, pushing up its market value from just $0.39 in 2010 to around $12,000 at the end of 2017. But its increasing value and popularity has also been met with a surge in problems, particularly in processing transactions and verifying accounts.

Bitcoin’s banking activities rely on blockchain technology to function effectively, but could this innovative platform be starting to buckle under increasing pressure, and if so, what can be done? Peter Taylor, Director and Chief Investigator at ACEMS, along with ACEMS Associate Investigator Rhys Bowden and colleagues, are searching for answers to these and other questions, and their findings are breaking new ground.

Peter has been conducting research into Bitcoin blockchain technology since 2013. His interest in Bitcoin was piqued after his then PhD student Jonathan Budd approached him with the idea for a new project. Peter involved other colleagues in the project and the international team based in Australia, Germany and South Africa, have been studying Bitcoin blockchain technologies in the context of applied probability. 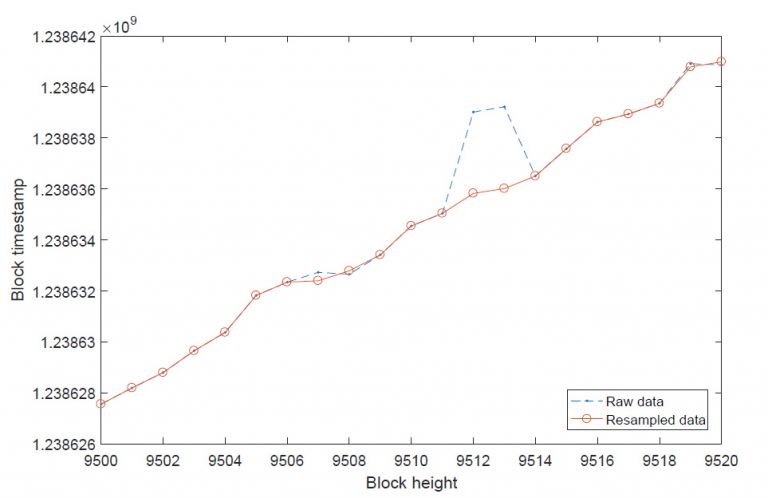 Identifying and cleaning probable errors from Bitcoin blockchain timestamp data prior to analysis.

“I saw it as a real opportunity to do some novel work in an area which was new, interesting, and probably important,” says Peter. “A lot of people from around the world are paying attention to Bitcoin itself and even more so to the idea of blockchain technology.”

Bitcoin is a decentralised digital currency that was launched in 2009 by an individual or group, under the pseudonym Satoshi Nakamoto. It can be used to buy and sell goods and services from individuals and companies that accept Bitcoin. Unlike other currencies, Bitcoin has no central authority, but instead uses peer-to-peer blockchain technology to manage transactions. Under this system, users within the network, known as ‘miners’, process transactions by solving a difficult cryptographic problem using high powered computers and in return are rewarded with Bitcoins.

Peter and his colleagues have been examining the effectiveness of Bitcoin blockchain technology.They have been studying the extent to which communication delays between miners can affect the functioning of the blockchain by causing them to have different versions of the blockchain. Their research shows that the blockchain currently splits a couple of times a day, but fortunately the splits are never serious and repair quickly.

In their first journal publication on Bitcoin in 2016, Peter and his colleagues revealed how miners can use communication delays to manipulate the system – essentially to mine more than their share, but this results in all parties mining less overall. However, they also showed that with adequate monitoring the mining community can detect and rectify the misuse.

What the researchers are now investigating is how the Bitcoin system can be redesigned to cope with increasing demand, so that the transaction processing rate can potentially rival that of Paypal or Visa. Currently, Bitcoin processes about three or four transactions per second worldwide, but this is very low compared to Paypal, which can process about 200 payments per second and Visa, which has the capacity to process up to 50,000 transactions per second, if it needs to.

“What the whole Bitcoin community wants to do right now is increase the transaction processing rate, so that it can process more payments per unit time,” says Peter. “And what we are doing is using our mathematical models to see how this can be done, taking into account the fact that information transfer is not instantaneous, and making some realistic assumptions about the amount of time it takes to actually do the computational work.

“We have got some ideas which we are working on and we think are going to be very fruitful. This is really important because, as I say, it is widely recognised that Bitcoin currently cannot be scaled up to be a transactional processing system on the same level as a credit card or Paypal, for example.”

Peter is excited about the possibilities that innovations in blockchain technology have for Bitcoin, but also beyond – he sees the potential the technology may have for any type of system that requires a distributed way of maintaining trust.“There is a lot of interest around the idea that you might have a way of keeping records that are maintained by a community in a trustworthy way, not kept by a central authority. Because even if there is a central authority, it might want to implement a blockchain so that people trust it,” adds Peter.