What’s going to happen next with the COVID-19 pandemic in Australia? What about a few weeks from now? What about in different states and territories?

These are the questions a team of researchers from around Australia are trying to answer. The group includes multiple members from the ARC Centre of Excellence for Mathematical and Statistical Frontiers (ACEMS).

The team is led by Professor James McCaw from the School of Mathematics and Statistics at The University of Melbourne and Professor Jodie McVernon from the Peter Doherty Institute for Infection and Immunity. Since March, the group has been busy modelling the pandemic. Every week, the results of that modelling shows up on the desks of Australia's top leaders who are making critical decisions about things like social distancing, whether to reopen economies, or keep people at home. 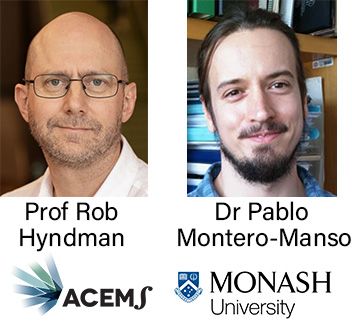 “It’s an interesting time to be producing real-time forecasts that turn into policy within a few days,” says Professor Rob Hyndman.

Professor Hyndman is the Head of the Department of Econometrics and Business Statistics at Monash University and an ACEMS Chief Investigator. For years, he’s helped companies and government agencies around the world forecast things like product sales, energy usage, and tourism. But not epidemics.

Leaders of the pandemic modelling team knew, though, they needed a forecaster, and Professor Hyndman is known around the world for his work.

“Forecasters and epidemiologists haven’t worked together much before. Epidemiologists usually study disease dynamics and measures to reduce transmission. But with a pandemic occurring, we need to join forces in order to provide the best advice on how to manage the situation,” says Prof Hyndman.

Professor Hyndman’s primary role on the panel is to produce an ensemble forecast from several different mathematical models on the spread of COVID-19 here in Australia.

“An ensemble is when you combine forecasts from multiple models to get an overall forecast. If one model leaves out some important information, it hopefully gets picked up in one of the other models. Generally, you get better forecasts than if you took any of the models on their own,” says Prof Hyndman.

More models make for a better ensemble forecast. So, the team turned to Professor Joshua Ross, an ACEMS Associate Investigator at The University of Adelaide. Professor Ross has been using mathematical modelling to study epidemics for well over a decade and was well known to the team’s leaders.

“The pandemic is one of those things we always knew was inevitable, but still didn’t want it to happen,” says Prof Ross. 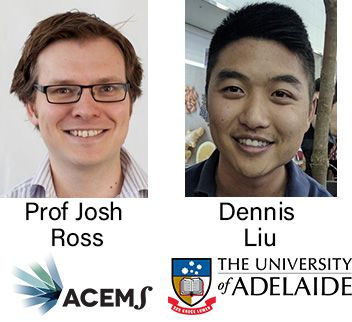 To help him, he enlisted Dennis Liu, an ACEMS PhD candidate at Adelaide, whose research and skills aligned perfectly with what was needed for this work.

“We’ve always talked a lot about research impact. But to know that what I’ve researched these past few years is now being used at the highest levels is really something,” says Dennis Liu.

With help from Dr Lewis Mitchell from ACEMS at Adelaide, the duo created a model from scratch looking at how the coronavirus spreads from one person to the next. The model includes Google mobility data about how people are mixing and interacting. It also includes regular survey responses from people in Australia’s capital cities about their compliance to guidelines, like the 1.5-metre social distancing rule.

Before COVID-19, researchers predominately based their pandemic preparedness modelling on the flu, where transmission often coincides with the emergence of symptoms. That’s not the case, though, with this new virus.

“This type of pre-symptomatic transmission makes it trickier to control. But we’re starting to learn a lot about what we need to do, from both a modelling and policy perspective, in these scenarios,” says Prof Ross.

One of Professor Hyndman's Postdoctoral Researchers at ACEMS at Monash, Dr Pablo Montero-Manso, was already doing pandemic modelling for his home country of Spain. So he was brought in to help develop a third model for use in the ensemble.

For both countries, Dr Montero Manso is taking an abstract idea he started exploring about a year ago and putting it into practice.

“It's a way to pull data from different sources and use it in the forecasting. It’s very gratifying to know this idea can be used during one of the most important crises of our lifetime,” says Dr Montero Manso.

It’s been a lot of work for the team members, but they say it has been rewarding.

“Some of this is cutting-edge research. Part of what we're trying to do with the ensemble looks at the quality of each of the models each week and then adjust the weights to favour the good models.  There’s not much available research in that space, so it’s interesting and hopefully useful,” says Prof Hyndman.

Team members also appreciate the fact that Australia’s leaders value their work and are even learning about it as they go.

“For me, it’s hearing government leaders talking about the effective reproduction number and knowing what that means. That’s been a nice outcome,” says Professor Ross.

Team leader Professor James McCaw says it has been amazing to see the generosity and commitment of Australia’s mathematical and statistical community to support the national response.

"Australia's relative success in managing the epidemic to date is due, in part, to the provision of expert model-based advice. It has been a privilege to be able to guide and oversee that work, so much of it developed by ACEMS staff and affiliates, and present it to government," says Prof McCaw.

"The work demonstrates the fundamental importance of our discipline to the future prosperity of our nation."

Other ACEMS members have also been involved in important modelling work for the Australian Government. Both Dr Andrew Black and Dr James Walker from ACEMS at The University of Adelaide were engaged with some of the initial modelling that led to the first measures taken back in March. They, along with Professor Ross, are also analysing new data that is starting to be collected from household-based cohort studies, known as First Few X studies.

No doubt, all their efforts will continue for months to come, as leaders turn to the mathematical sciences to provide critical information on what may be coming next.