Graeme Denton, aka Marty McBubble, broke the record with a bubble that reached up 10.75 metres, or more than 35 feet, from the ground. 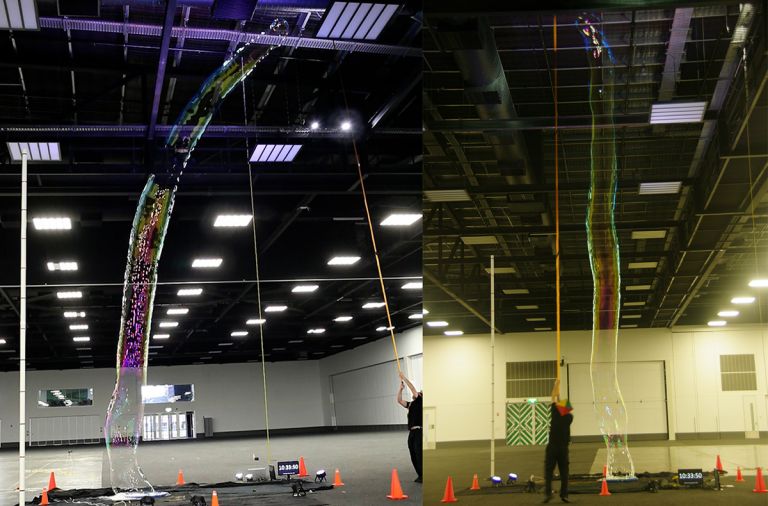 "I was pretty nervous. I made several attempts at the record, but as soon as I made that one, I knew it was high enough to beat the record," says Graeme.

Graeme carried out the record attempt on 30 September at the Goyder Pavilion at the Adelaide Showgrounds. Thanks to mathematical modelling and calculations by Professor Matthew Roughan, Guinness World Records have just confirmed the new record.

"The old record was just over seven metres. I was able to show that Graeme beat that by more than 50 per cent or more than three-and-a-half metres," says Matt, a Chief Investigator with the ARC Centre of Excellence for Mathematical and Statistical Frontiers (ACEMS) at The University of Adelaide.

In 2017, Graeme set a Guinness Record for the world's largest indoor, free-floating soap bubble. But you might say his bubble burst when someone broke that record last year. That's when he decided he would try to break a different record. In this case, the world's tallest free-standing soap bubble.

"I had to spend time re-working my secret bubble mixture so it would work with taller bubbles. I also experimented with hoop diameter and had to find the longest extendable pole that I could," says Graeme.

Measuring the height of Graeme's soap-bubble also needed careful consideration. One thing he didn't have to spend a lot of time considering was who was going to do the maths to show the height of his soap-bubble. Matt helped him with his last record in 2017, so Graeme knew he could count on him.

Matt worked with several other volunteers and photographers for several hours on the morning of the record attempt to make sure everything was in place to record Graeme's attempts at the record.

"I had to set up a reference cone grid, reference scale poles and worked with the photographers to get the cameras set up carefully. We even set up a camera on the catwalk that was more than eight metres above the floor," says Matt.

While the set-up took hours, setting the record took only a few minutes. The bubble curves a little bit at the top so that it could be sealed with a twist.

"I didn't want to waste the time of my volunteers. When I created the record bubble, I was just hoping we had captured everything correctly with the cameras, and we did," says Graeme.

Graeme started playing around with giant bubbles about five years ago while developing his educational show for kids as his character, Marty McBubble. The show is called "The Scientific Bubble Show" and is available to visit schools and centres across South Australia through Graeme's business Bright Spark Entertainment.

"There's a lot of science you can explain to children through the use of bubbles," said Graeme.

Now that he's worked with Matt for both of his world records, Graeme knows there's plenty of maths too.