Safer Drug Screening and Better Simulations: Maths Getting to the Heart of the Matter

More accurately simulating how the heart functions and screening for side-effects of new drugs are just two results that have sprung from a collaboration between Australian and British scientists.

Their simulations account for the many natural differences not only between individual hearts, but between different heart cells.

Mathematical modellers and statisticians from the Queensland University of Technology (QUT) and the ARC Centre of Excellence for Mathematical and Statistical Frontiers (ACEMS) are collaborating with a British research group that generates some of the world’s most sophisticated computer models of the operation of the heart.

The ACEMS contribution has helped the Computational Cardiovascular Science Group at Oxford University employ new modelling approaches to simulate how the heart functions. Among other outcomes, the group’s work has led to software that can be used to test for potential side effects of new drugs, potentially saving hundreds of millions of dollars by ruling out unsafe compounds. Known as Virtual Assay, the package is currently being assessed by major pharmaceutical companies and the US Food and Drug Administration.

The link with ACEMS is through Chief Investigator Kevin Burrage, Professor of Computational Mathematics at QUT and a Visiting Professor at Oxford. He has worked with the Oxford group led by Professor Blanca Rodriguez since 2008.

“The group has a unique focus. It’s not about modelling, so much as the insights that models can bring to understanding the different types of human heart diseases. The group really cares about calibrating and, where possible, validating its models against experimental and clinical data,” Kevin says. 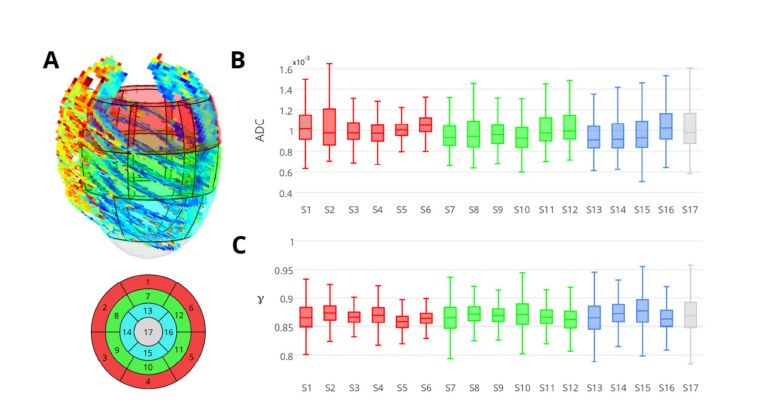 Figure A shows the standardised American Heart Association segmentation of the cardiac ventricle V2 (bottom) into 17 segments with the apex of the heart in the centre. The fibres and their orientation in the myocardial tissue are shown in the top figure of A. Figures B and C show computed results from Diffusion Magnetic Resonance Imaging (DMRI) experiments from four female rat hearts for each of the 17 segments given in Figure A. DMRI is a noninvasive imaging technique that is sensitive to the magnetisation of molecules undergoing diffusion and so can map structural features and can characterise tissue heterogeneity. Figures B and C show how certain key spatial metrics vary both within a single heart and between different hearts.

One of the significant issues the researchers have struck, and of major interest to Kevin, is the problem of variability. At the cellular level, no two cells are alike. And at the tissue level, there’s huge variation in the structure of how hearts are constructed from different cells, fibre, fat, blood vessels, pores and connective tissue. Yet all these different hearts still function.

“You could build a model to fit average values of the data from sources such as electrocardiograms (ECGs) and magnetic resonance imaging (MRI). That was what was done historically. But then you would ignore all the variability.”

With help from Kevin and his colleagues at QUT, such as Research Fellow Dr Brodie Lawson, Associate Investigators Dr Pamela Burrage and Dr Chris Drovandi, and Chief Investigator Professor Anthony Pettitt, the Oxford group has constructed models that incorporate the variability at different scales. At the cellular scale, they have borrowed from climate science to come up with a technique of populations of models, all of which are calibrated to the data and can be run to provide a distribution of outcomes.

At the tissue level, Kevin has developed new techniques using ideas from statistical physics that capture the structural diversity via a concept known as fractional diffusion. In work that’s been published, the group has already calibrated their models against mouse data. Studies linking to human data are in press.

“This collaboration fits beautifully with what ACEMS is about in the important area of complex modelling using simulation and statistical techniques to address fundamental problems in science.”