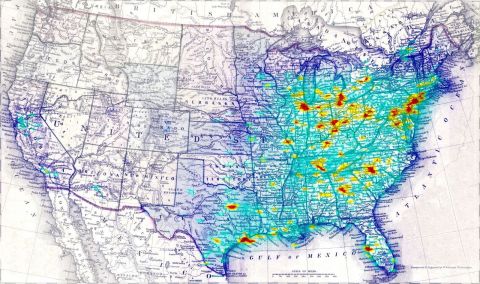 Predictions of a spatially explicit model for the spread of infection

The broad aim to develop mathematical models for population dynamics that account for local population behaviour, individual variation, spatial structure, and differing migration patterns, and to calibrate these models to real data.

The team has been developing mathematical models for biological systems, particularly metapopulations (populations that occupy geographically separated patches of habitat), and epidemic models that incorporate spatial structure and individual variation.

Profs. Barbour and Pollett, and Dr McVinish, have studied the relationship between certain stochastic and deterministic versions of some existing models. Using Vapnik-Chervonenkis theory they have show that the stochastic version can be well approximated by the deterministic version when the number of patches is large, provided that the presence or absence of individuals in a given patch is influenced by a large number of other patches. Explicit bounds have been obtained that assess the quality of the approximation. They are presently exploring several extensions.

Dr McVinish is collaborating with Emeritus Prof. Robert Lester (UQ School of Biological Sciences) on modelling parasite burden in fish populations. The aim is to explain the degree of overdispersion observed in parasite counts and how this is affected by trophic level (position in the food chain).

Further investigation is planned, including examining the problem of fitting their models to fisheries data.

Ms Chan, Dr McVinish and Prof. Pollett have studied population models that account for the evolution over time of landscape characteristics which affect the persistence of local populations.  Threshold conditions for persistence of the population have been obtained using an approximating deterministic model that is realized in the limit as the number of patches becomes large.

4. Limiting the spread of disease through altered migration patterns

Dr McVinish, Prof. Pollett and Dr Shausan have examined how individuals susceptible to a disease can act collectively to limit its spread during the initial phase of an epidemic. More specifically, they have considered how susceptible individuals can distribute themselves in a metapopulation in order to minimize the growth rate of the epidemic when the infectives migrate so as to maximise the growth rate (minimax optimization).

This project, joint with Dr Tafakori and Prof. Taylor, is in its early stages. The aim is to improve our understanding of the role of cell proliferation in tissue growth.

There are presently three PhD students attached to the project. Liam Hodgkinson commenced in April 2016, co-supervised by Prof. Pollett and Dr McVinish. He is developing limit theorems for patch occupancy models.

Patrick Laub commenced in January 2015, co-supervised by Prof. Pollett, and Profs. Soren Asmussen and Jens Ledet Jensen (Aarhus). He seeks to develop tools for the asymptotic analysis of models that encapsulate the dependent behaviour observed in high-frequency data.  Wangyue (Winnie) Xie commenced in July 2014, co-supervised by Prof. Pollett and Dr Rojas-Nandayapa. She is working on scale mixtures of phase-type distributions, which can be used to model extinction risk in population models, and ruin in insurance models.