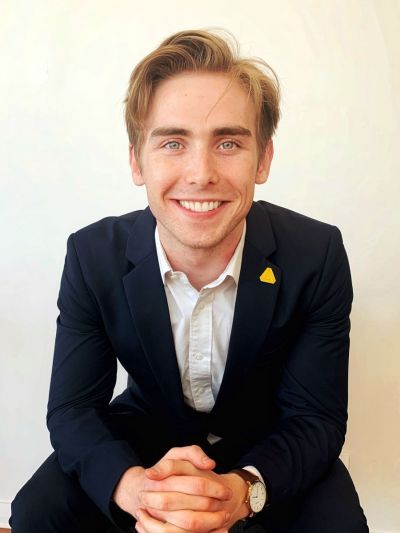 ACEMS Research Masters student Tobin South has just been awarded a prestigious Fulbright scholarship and will use it to head to the Massachusetts Institute of Technology (MIT) to begin his PhD.

Tobin recently completed a Master of Philosophy in Applied Mathematics and Data Science with ACEMS at The University of Adelaide. In September, he leaves for Boston to undertake a PhD with the MIT Media Lab.

In particular, Tobin will work with Alex ‘Sandy’ Pentland, the father of modern social physics, in MIT's Human Dynamics Lab.

“We will use big data and computational social science to study and understand how we can better organise society, government, companies and much more,” says Tobin.

Tobin started working with researchers at MIT during his time with ACEMS in 2019, thanks to a collaboration between the MIT Media Lab and the South Australian Government known as the MIT bigdata Living Lab at Lot Fourteen in Adelaide.

“A key area of focus both in the MIT Media Lab and at Adelaide Uni is the study of complex systems. These are systems like the economy and social networks where large numbers of individuals come together to create an interdependent ecosystem which can prove very hard to understand. Our research focuses on some specific ways to study the impact of changes in these systems from an Australian context,” says Tobin.

Tobin credits ACEMS Chief Investigators Lewis Mitchell and Matt Roughan for helping him tap into the research opportunities coming out of MIT.

“I couldn’t have asked for better mentors and supervisors. In particular, Lewis set up the collaborations that led me to MIT and gave me the freedom to pursue interesting and diverse research," says Tobin.

Fulbright is the flagship scholarship program between Australia and the United States. Fulbright awarded Tobin one of its Fulbright Future Scholarships, allowing students to undertake a full PhD program anywhere in the U.S.

Tobin says he is excited to be heading to the MIT Media Lab because of its strong interdisciplinary spirit.

But a part of him will be said to leave Adelaide.

“ACEMS has been great and especially the Adelaide team. Even simple activities like a regular weekly meetup where someone presented their research and ACEMS bought coffee added a vibrance to my studies and helped me figure out where I wanted to take my research,” says Tobin.

Good luck, Tobin. You will be missed, but we can't wait to see where this next step in your journey takes you!