What if you could predict a bushfire before it even breaks out?

That’s the aim of some just-published research from a team at the ARC Centre of Excellence for Mathematical and Statistical Frontiers (ACEMS).

Using mathematical, statistical, and machine learning techniques, the ACEMS team developed a model to predict whether a fire will likely break out when certain types of vegetation come in contact with a powerline. 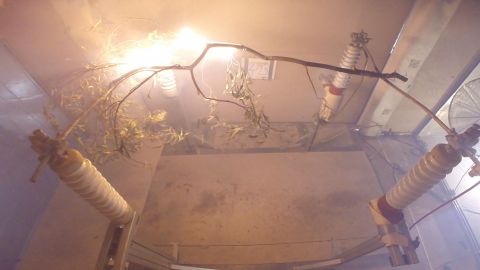 “For example, a branch falls on a powerline. We want to know quickly whether that branch is going to catch fire,” says Dr Sevvandi Kandanaarachchi, an ACEMS Associate Investigator at RMIT.

In 2017, the PBSP held a competition designed to identify which plant types and vegetation were more likely to catch fire. Dr Kandanaarachchi and Dr Mario Andrés Muñoz were part of the ACEMS team that entered the Vegetation Detection Challenge.

“We finished second in the competition but didn’t want to stop there. We saw this massive amount of data that was publicly available. Given that this is such a significant problem in Australia and other parts of the world, we really wanted to use that data to advance our mathematical model,” says Dr Muñoz, an ACEMS Associate Investigator at The University of Melbourne.

In all, the PBSP conducted over one-thousand experiments inside the controlled environment of a container. Researchers placed different types of branches from many different species of trees and vegetation on a powerline. That allowed them to get a lot of data on the patterns and different fault signatures coming through the powerline and compare that to what they were actually seeing.

“Our model examined that data, and we were able to identify a handful of tell-tale features that can let us know whether that branch is likely to spark,” says Dr Kandanaarchchi.

“If an electricity service provider has that information, it can take action that might prevent a bushfire.”

For now, the ACEMS models are based on that experimental data. The team hopes that some government agency or private company will see the research and look to advance it more so that one day it can be used in the real world.

“We saw how bad the bushfire season could get this past summer. It’s never been more important to think about developing tools that might prevent some of these bushfires from ever breaking out,” says Dr Kandanaarachchi.

The third member of the ACEMS team is Nandini Anantharama, a PhD candidate at Monash University. Her work included a creating a software package in the widely-used programming language of ‘R’ to read the data files used in the Vegetation Detection Challenge. This will it easier for other researchers to read these files.