Workshop at The Rock to Celebrate Phil Pollett's 60th Birthday 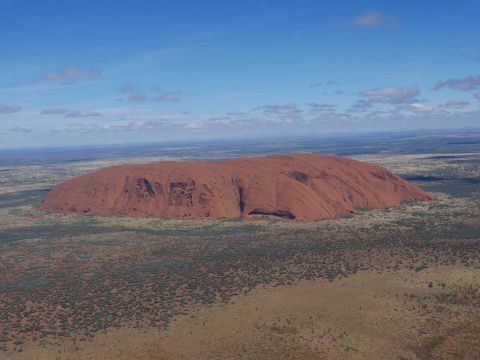 Those were the words of Professor Phil Pollett, shortly after his 60th birthday celebration wrapped up.

About 70 people, many travelling from different parts of the world, gathered last month to celebrate Phil’s 60th with an applied probability conference. It was held in one of Australia’s most iconic spots, near Uluru, at Ayers Rock Resort, in Australia’s Northern Territory. The conference was called Applied Probability at The Rock.

“I think it was a resounding success, both academically and personally,” says Phil, who is a Professor of Mathematics at The University of Queensland (UQ) and a Chief Investigator for the ARC Centre of Excellence for Mathematical and Statistical Frontiers (ACEMS).

The main theme of the conference was mainstream Applied Probability. The underlying theme of the week, though, was the impact Phil has had, or has now, on the lives of many of the people who attended.

Dr Joshua Ross helped organise the event. Josh is an Associate Professor in the School of Mathematical Sciences at The University of Adelaide, an Associate Investigator for ACEMS, and one of Phil’s former PhD students at UQ.

“Something that I was well aware of, but that became completely evident during the week, was how tremendous Phil is with mentoring. Not just with his own students, but with the whole applied probability community,” says Josh.

Group shot from the Applied Probability at The Rock Conference

In fact, speaker after speaker at the conference talked about the impact Phil has had on their lives.

“I was quite taken aback by the apparent influence I have had on people,” says Phil.

“It wasn’t just how I helped people with their careers. My idea is to help people find the right path, to encourage them to be balanced in their life.”

“I didn’t quite realise it until I heard the words that were said about me and what an impact I have made. Since the conference I’ve been reflecting quite a lot on that.”

The other keynote speaker who made the trip to see Phil, was Phil’s PhD supervisor from his days at the University of Cambridge, Professor Frank Kelly, who is still in Cambridge.

“I was privileged to have Phil as my first research student, and was delighted to be able to attend this conference in Phil’s honour,” says Prof Frank Kelly.

Professor Kelly says he was really impressed with the talks given by students and early career researchers who attended.

“For me, one of the most notable aspects of the conference was the breadth and quality of the contributions from younger participants. This attests to the encouragement and mentoring provided in the Applied Probability field, and to the general environment provided through the discipline's leadership in Australia. Phil can be proud, amongst much else, in this legacy," says Prof Kelly.

Three students finished very closely in the competition for the best talk. In the end, one of Phil’s current PhD students at UQ, Liam Hodgkinson, won the prize. Two other ACEMS students, Peter Braunsteins (Melbourne) and Patrick Laub (UQ) were highly commended.

Phil was joined by his wife, Patricia, at the conference. The location of the conference was a big attraction for others as well, with more than a dozen people showing up with their partners, and some, even with their kids. Having the conference in Uluru meant a lot to Phil.

So as he looks back at the week, it’s no surprise Phil is already looking forward to the next ten years, and to the celebration he hopes will take place when that landmark birthday rolls around.