The Szekeres Medal is awarded biannually for “an outstanding contribution to the mathematical sciences.”

Peter is a globally respected stochastic modelling researcher, and is known for the contributions he’s made to the fields of applied probability and operations research.

“Australia has played a major role in fostering the development of applied probability worldwide. For example the founder of the Journal of Applied Probability, Joe Gani spent a large amount of his time here, including the final part of his career. Another Editor-in-Chief, Chris Heyde was also Australian. I have been delighted to have continued that legacy and am thrilled to have my contributions recognised in this way. When I look at the list of previous winners of the Szekeres Medal, who are all giants of the community, I’m humbled to see my name among them,” said Peter. 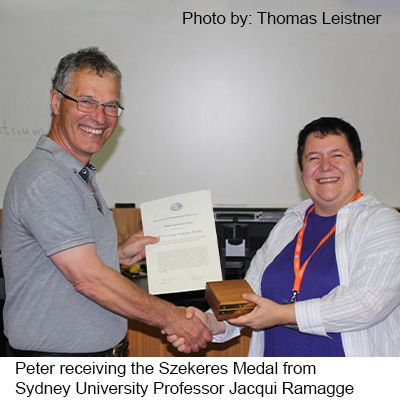 In honouring Peter, AustMS cited his many contributions to a variety of different areas. Those include the control of telecommunications systems and data networks, the management of natural resources, mechanism design in economics, the calculation of the probabilities of extreme rainfall and bushfire events, understanding patient flow in healthcare systems and new `disruptive technologies' such as blockchains. He has also maintained a passion, which continues to this day, in understanding the behaviour of queues.

"In Peter's case, for his leadership and advocacy contributions as a former President of AustMS, former Chair of the Australian New Zealand Industrial and Applied Mathematics (ANZIAM), and current director of our national Centre of Excellence. His legacy is already immense, and continues to grow," said Kate.

ACEMS Deputy Director Nigel Bean nominated Peter for the award, and is very pleased that he is being honoured.

“There is no doubt Peter has been a leading researcher in his area for many years, and is very much in the top tier internationally,” said Nigel.

“Peter was a great mentor for me early in my career, and remains so to this day.”

The Szekeres Medal is named after George Szekeres, a renowned mathematician who was born in Hungary. Being Jewish, he fled Nazi persecution by moving to China in World War II. He came to Australia in 1948, and took a position at The University of Adelaide, where his career as a mathematician began to flourish. He later taught at the University of New South Wales (UNSW) from 1963 to 1975.

Szekeres’ ties to Adelaide carry a lot of significance for Nigel, who is a professor there, and for Peter, who began his career there.

“It is especially poignant to me, in that George Szekeres was a staff member at The University of Adelaide, well before my time, but his reputation remained and some of George’s fellow Hungarian mathematicians were still active in Adelaide during my student days,” said Nigel.

In 2017, The University of Melbourne honoured Peter with the title, Redmond Barry Distinguished Professor.  Also last year, the Australian Society for Operations Research (ASOR) awarded Peter its highest honour, the Ren Potts Medal. In 2013, the Australian Research Council awarded Peter a Laureate Fellowship. Peter was named Director of ACEMS in 2016.