A lunchtime chat ends with a breakthrough idea for ACEMS researchers at Monash University. That idea lands their latest research project in the most prestigious journal in physics, Physical Review Letters. 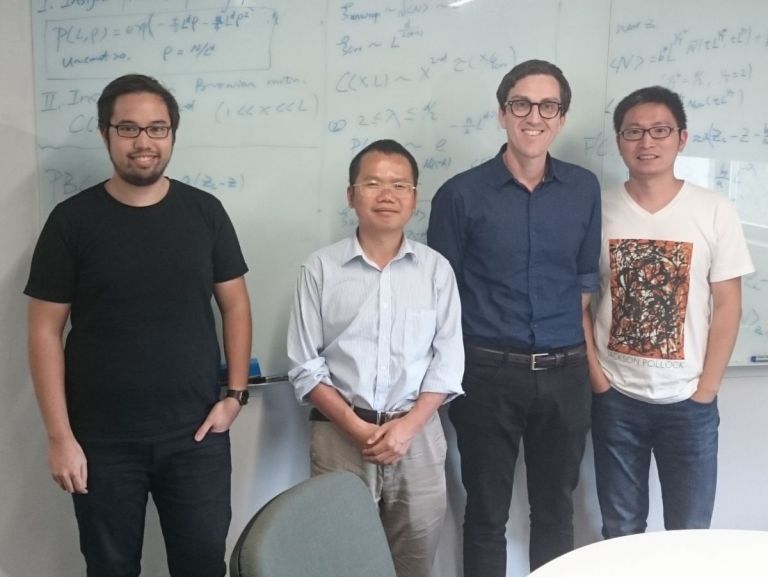 The ACEMS team is made up of Dr Zongzheng “Eric” Zhou, Jens Grimm, and ACEMS Chief Investigator Tim Garoni.  They were joined by collaborators Sheng Fang and Youjin Deng from the University of Science and Technology of China to author the paper titled, “Random-Length Random Walks and Finite Size Scaling in High Dimensions.”

At the heart of their research, taking a relatively simple model and using it to better explain two models some physicists and mathematical physicists have devoted their whole careers to. Those two models are the Ising model, and the Self-Avoiding Walk (SAW) model.

The Ising model was introduced in the 1920’s as a model of magnetism, but its current applications span way beyond that. The Self-Avoiding Walk (SAW) model is a model of a polymer in a good solvent. Both involve understanding systems which are strongly interacting.

To understand SAW, it’s helpful to first understand a Simple Random Walk, or SRW, which is one of the most fundamental objects in probability theory. The beauty of SRW is that many of its properties can be calculated explicitly.

So what is SRW? A two-dimensional example on an infinite square lattice is as follows. Imagine you’re going for walk. Start at one intersection, roll a four-side die that is labelled east, west, north and south, and take a step in the specified direction. Repeat without ever stopping. The resulting random path is a ‘simple random walk’. With a SRW, you can visit each intersection many times. The difference between SRW and SAW, though, is that in SAW, you can only visit each intersection, or vertex, once.

You can then generalise SRW and SAW from two dimensions to lattices in any dimension. What the ACEMS team looked into were these models in high dimensions. Previous research has shown that in high dimensions, SAW essentially behaves like SRW on large scales. In fact, for most questions of interest, you can view SRW as a good ‘approximation’ to SAW in high dimensions.

But there’s a catch. This SRW – SAW correspondence only holds for infinite systems, not ones contained in finite boxes.

That’s where the lunchtime chat that we mentioned comes into play. The ACEMS team members were hosting Youjin Deng from China and were discussing this problem involving SAW in finite boxes.

“We came up with the idea of ‘random-length random walks’ as a solution while having lunch in the Monash student centre,” said Assoc Prof Tim Garoni.

A random-length random walk, or RLRW, is like SRW. But instead of taking infinitely-many steps, you choose a random number of steps before you start, and then only take that many steps. So you get a finite path. By choosing the random path length in an appropriate way, that depends on the size of the box, you obtain a model that mimics SAW in a box.

Taking it a step further, Tim says the Ising model can also be viewed as a complicated random walk model, a bit like SAW, so they can use RLRW to understand Ising on finite boxes too.

“There are long-term debates regarding the finite-size behaviours of some fundamental models of statistical mechanics in high dimensions. It is subtle due to lack of theory and difficulty of obtaining numerical results in high dimensions. We think our work can significantly improve understanding of this problem,” said Dr Eric Zhou.

For physicists, one of the key points of debate for years has been over boundary conditions, or the conditions that make something finite. They don’t matter in low dimensions, but it turns out they matter very much in high dimensions. Until now, there was no simple explanation for this. But the ACEMS research now shows that RLRW gives that simple explanation.

“So we can understand a more complicated thing through a simpler thing which, in a nutshell, is the only thing a mathematician ever tries to do,” said Tim.

“Youjin even organised a workshop in China, and I was able to talk about this research to a group of experts before we submitted to Physical Review Letters,” said Eric.

So some international collaboration, combined with some lunchtime inspiration, leads to a big breakthrough for this team of researchers.