The Marvel Cinematic Universe (MCU) is by far the most successful movie franchise ever. More so than James Bond, Harry Potter, or even Star Wars. But why? 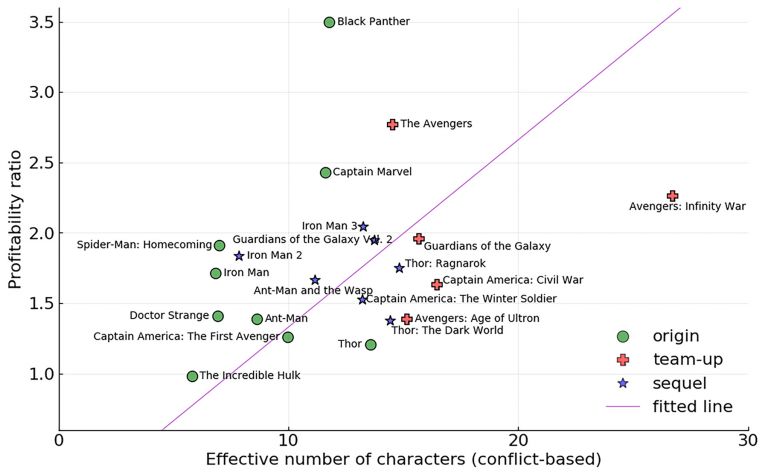 Figures that show box office revenue, profitability, merchandise sales, and even how high a movie is rated can quantify whether a film is a success.

But researchers at the ARC Centre of Excellence for Mathematical and Statistical Frontiers (ACEMS) set out to quantify why the MCU is so popular. The ACEMS researchers used statistical methods and even borrowed an approached used in ecology to carry out their research.

Their results, just published in PLOS One, show there is a correlation between, what they call, ‘effective cast sizes’ and how well each movie performed.

“There is a clear correlation between cast sizes and profitability. A bigger cast is better. We also looked at IMBd ratings, and again we saw this correlation,” said Prof Matt Roughan, an ACEMS Chief Investigator at The University of Adelaide.

The keyword here is correlation. Prof Roughan is quick to point out that just because there was a correlation between cast size and things like profitability or ratings, doesn’t mean that cast size caused those things. However, their methods and findings could shed light on factors associated with the success of the movies.

The main factor the ACEMS team wanted to explore is the effect of cast size. Quantifying the size of a movie cast is no easy thing, though, especially with the MCU movies. It’s not just a matter of finding out who’s listed in the movie credits, or on the IMDb website.

Dr Lewis Mitchell is a Lecturer and an ACEMS Associate Investigator at The University of Adelaide. He says the list of names on the credits can range from main actors to anyone who had any involvement whatsoever with the making of the film. 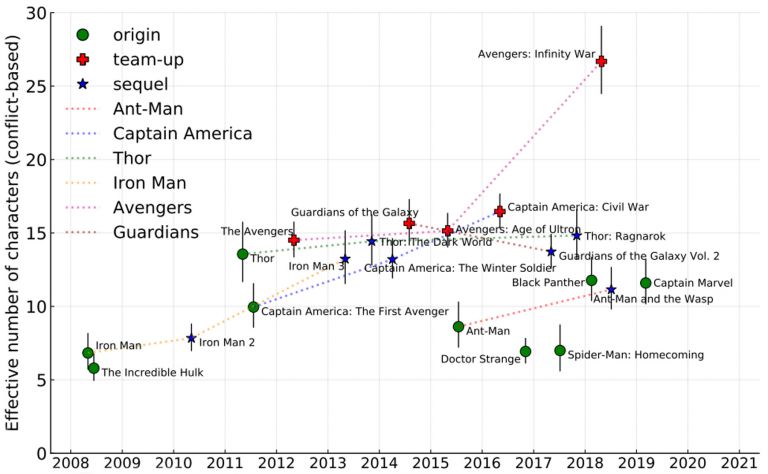 Effective cast size of each movie in the MCU showing type of movies by shape, and sub-sequences connected by dashed lines. The x-axis is when the films were released.

“You even see ‘production babies’ listed in film credits, but they have presumably hindered rather than helped in the making of the film! The point is that there is a huge variation, even within the MCU, so we found it surprisingly difficult to determine the 'cast' of each film consistently,” said Dr Mitchell.

To begin with, the ACEMS researchers re-watched all the movies, which wasn’t a hard ask for these MCU fans. But they didn’t just count the number of characters. Instead, they looked at how they contributed to the movie.

“We looked at how many lines of a dialogue a character had in the script and, more importantly, how they contributed to conflict,” said Prof Roughan.

They then turned to ecology to use a method known as entropy to understand their cast size better.

“When ecologists are looking at the biodiversity of a region, they don’t just want to count the number of species. Two regions might have the same number of species but be very different. For example, one region may be dominated by one or two species, while the other is much more diverse,” said Prof Roughan.

Using these methods, they were then able to quantify an 'effective' cast size. That size changed as the franchise evolved. Many of the films featured individual characters, such as Iron Man, Captain America and Thor. There were sequels, and then came the ‘team’ movies, where characters were all featured as part of the Avengers team. MARVEL then repeated this process by releasing origin movies for new characters, leading to even bigger teams.

Plotting each movie based on the “effective number of characters,” the researchers showed that sequels to each storyline tended to boost the number of characters in subsequent films. Also, with very few exceptions, the profitability of the movies trended upward as well. 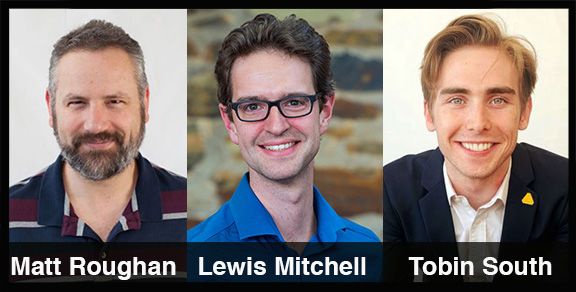 While their research showed a correlation between cast sizes and profitability, Prof Roughan admits there are elements of the franchise’s success that can’t be quantified.

“I think it’s unique in terms of movie franchises because it has this superstructure around it. It has this universe they’re building where they’re putting a large number of consistent movies, consistent timelines, and consistent characters over this broader space,” said Prof Roughan.

Prof Roughan hopes to apply the methods used in this project to other things outside of the MCU.

"I think this diversity metric is useful outside of narrative analysis. We have some applications in cybersecurity that I think could be interesting as well,” said Prof Roughan.

Tobin South, a masters’ student with ACEMS at The University of Adelaide, also helped Prof Roughan and Dr Mitchell with the project.