ACEMS Chief Investigator Louise Ryan picks up a special honour from the university where she completed her undergraduate studies many years ago. 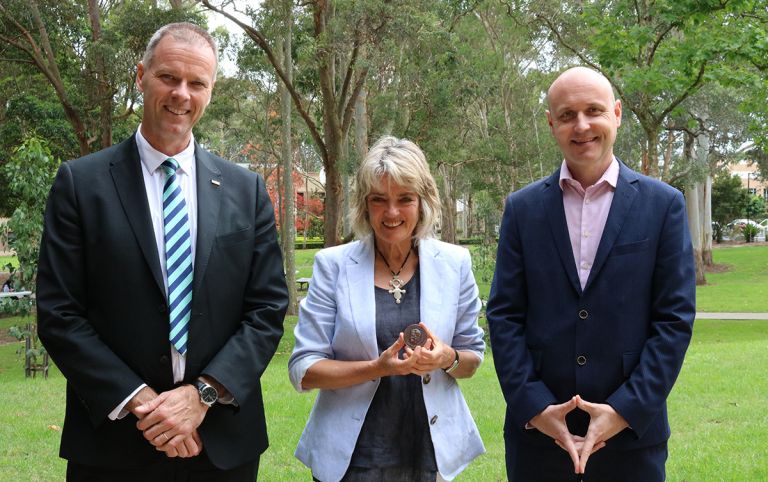 Macquarie University has chosen Louise to receive the Moyal Medal, named after the late Professor Jose Enrique Moyal. It is given annually for research contributions to mathematics, physics or statistics. For Louise, it is for her decades of blending statistical methods research with applications in the real world, particularly in the health and environmental domains.

“This award is particularly special because Macquarie is where I realised that I wanted to do statistics,” says Louise.

Louise started out doing actuarial studies at Macquarie University in the mid 70s.

“In that program, we actually learnt a lot of statistics. It was then when I had my light bulb moment and knew what I wanted to do,” says Louise.

Louise ended up switching from actuarial studies and completing an honours degree in statistics at Macquarie in 1978. From there, she went to Harvard University, where she earned her PhD and began working in the Harvard Biostatistics Department. She spent more than 25 years there, finally as the Henry Pickering Walcott Professor and Chair of the Department.

In 2009, Louise returned to Australia as Chief of CSIRO's Division of Mathematics, Informatics and Statistics. She joined the University of Technology Sydney as a Distinguished Professor of Statistics in 2012.

As part of receiving this award, Louise will present the Moyal Medal Lecture on 6 December at Macquarie University and online.

Because of COVID restrictions, only ten people will be able to attend in person. However, they will include six of her former undergraduate teachers!  The lecture will be followed by a small lunch where there will likely be much fond reminiscing.

“I will never forget, I took ‘maths-stats 1’ from Ann Eyland. Don McNeal was my honours advisor. Both people have had such a massive influence on my life, even after I left Macquarie. I am so excited they will be there,” says Louise.

The title of her lecture is, “How statistical modelling and machine learning can offer insights about the sustainability of our precious water resources”. The talk connects to a project she has been involved with the past few years with the New South Wales Office of the Chief Scientist and Engineer as well as the NSW Department of Planning, Industry and Environment .

"It is an extremely challenging but important problem. We need to better understand how sustainable our water resources are. Statistics and machine learning are helping us do that,” says Louise.

"It is really a bit of a who's who. The list includes so many of my heroes,” says Louise.