When am I ever going to use this stuff? It's a question a lot of students often ask when studying maths at school.

Dr Giang Nguyen is mixing research and outreach to make sure students get the message that maths and stats are fun, important, and can make a big difference in the real world. 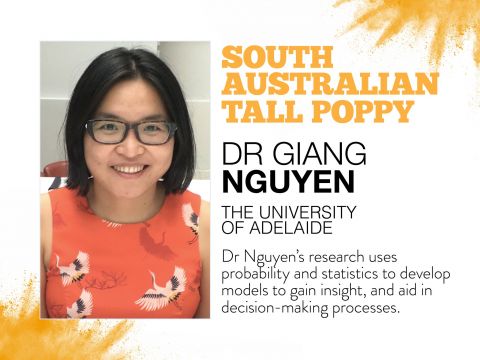 Because of that, Giang has just been named a South Australian Tall Poppy. The Australian Institute of Policy and Science created the Tall Poppy awards to celebrate achievement in the sciences, and to encourage students to follow in the footsteps of these scientists.

"This award means a great deal to me because it focusses on both research excellence and engagement with the public," said Giang, who is a Senior Lecturer at The University of Adelaide and an Associate Investigator with ACEMS.

"Being a Tall Poppy will allow me to participate in more outreach activities to further encourage students to go into mathematics and statistics."

Giang's research uses probability and statistics to develop models to gain insight and aid in decision-making processes in real-life situations. She has applied these models to a wide array of fields, ranging from cancer treatment to predicting the South Australian power grid.

Her outreach activities include volunteering in the CSIRO Mathematics in Schools program and in ACEMS' main outreach program, MathsCraft.

"I've really been enjoying MathsCraft events, which I think are a fantastic way to give school students a window into why mathematics is fun. MathsCraft nails all the key aspects of doing mathematics like a mathematician. Those are creativity, exploration, collaboration, abstraction and generalisation," said Giang.

The school of Mathematical Sciences at The University of Adelaide has produced several tall poppies over the past few years. They include Lewis Mitchell (2018), Luke Bennetts (2016), and Josh Ross (2013). Josh nominated Giang for this year's Tall Poppy Awards.

"Giang is an outstanding researcher who works across the spectrum of theoretical and applied projects. In addition, she is playing a key role in the STEM campaign to improve gender balance, and works tirelessly on outreach and leadership roles particularly targeting women in mathematics," said Josh, who is a Professor at The University of Adelaide and an ACEMS Associate Investigator.

Giang is also a member of the Women in Maths Special Interest Group (WIMSIG) as part of the Australian Mathematical Society (AustMS).

"I definitely hope that the female Tall Poppies this year will serve as additional examples of female researchers in STEM, and myself in maths and stats in particular," said Giang.
Giang was one of four researchers from The University of Adelaide named as South Australian Tall Poppies. The Tall Poppy of the year will be announced at the SA Science Excellence Awards on 9 August.