A team of ACEMS researchers takes home the award for best paper at the 2018 Conference for the Australian Mathematical Society (AustMS), which opened today in Adelaide.

The paper, titled “The Critical Fugacity for Surface Adsorption of Self-Avoiding Walks on the Honeycomb Lattice is 1 + √2”, is co-authored by ACEMS Researchers Nicholas Beaton, Jan De Gier, and Tony Guttmann from The University of Melbourne, along with Mireille Bousquet-Mélou from the Université de Bordeaux in France, and Hugo Duminil-Copin from the Université de Genève in Switzerland, and published in the prestigious journal Communications in Mathematical Physics. 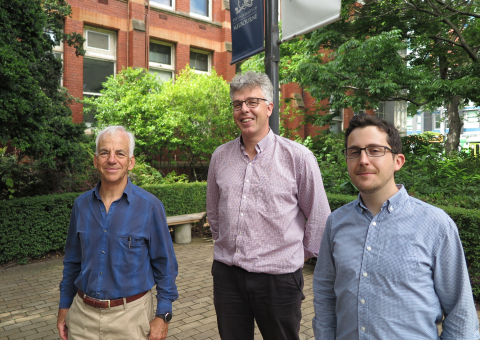 The  prize for a paper published in the years 2008-2016 is named after Gavin Brown, an influential mathematician who went on to serve as Vice-Chancellor of The University of Sydney from 1996-2008.

“It’s an enormous honour to receive the Gavin Brown Best Paper Prize of the Australian Mathematical Society for research performed in the mathematical sciences in Australia. Previous winners are exceptional Australian mathematicians. It is an honour to be named in this list, and receive such national recognition,” said Prof Jan de Gier, an ACEMS Chief Investigator and the Head of School for Mathematics and Statistics at The University of Melbourne. 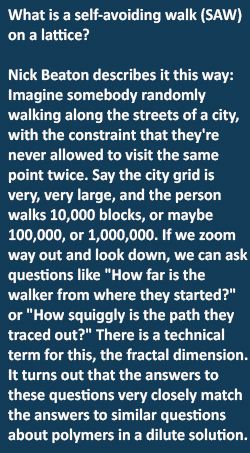 The paper deals with the mathematical physics of long polymer molecules, like DNA or plastics, in a dilute solution and how they interact with their environment. Specifically, the research describes one particular type of interaction, known as adsorption. Adsorption looks at how polymers may be attracted or repelled by a surface, say the sides of a test tube or the outer membrane of a cell.

What the ACEMS team did was provide a mathematically rigorous proof of the existence and value of the critical temperature of a particular model of self-avoiding walks (SAW) (SEE BOX INSERT TO THE RIGHT), namely walks on a honeycomb lattice.

“Mathematical physics, particularly the theories of polymers and self-avoiding walks, is full of deep conjectures which are widely believed to be true based on physics arguments, or from analysis of numerical simulations. We just don’t know how to prove these results mathematically, i.e. whether they are true beyond any doubt. So proving something in mathematical physics is a big deal. It often provides new insights and helps to lay a firm mathematical foundation for theory,” said Dr Nicholas Beaton, an ACEMS Associate Investigator at The University of Melbourne.

“The significance of the paper is in the methods. We brought together ideas from combinatorics, mathematical physics and probability theory,” said Nick.

The ACEMS team says it took a lot of long, hard work, along with contributions from their international co-authors, to provide the rigorous proof of that critical temperature.

One of the most intriguing and important facets of this research is the concept known as universality.  This is when certain mathematical expressions resurface time and again to describe many phenomena, even when the specific details of those phenomena are very different. The Gauss distribution (bell curve) is a famous example of universality. In the case of this research, it concerns the similarity of certain properties of self-avoiding walks and those of  polymers in a dilute solution.

“The way we proved it, by connecting different areas of mathematics, is very important as it provides deeper insights in how the world works, and what sort of mathematics is needed to understand our world at a fundamental level,” said Jan.

While the research and the results were very significant, adding the Gavin Brown Award makes it even more special.

“We’re very honoured. We put a lot of work into this, and there were a number of times when we thought we were done only to realise that the problem is even more subtle than we had imagined. So from that standpoint, this is very gratifying,” said Nick.

The team received their award today at the start of AustMS 2018 being held in Adelaide, South Australia.