The Royal Academy of Science, Letters and Fine Arts of Belgium elects Aurore as an Associate Member. The Academy is the learned society of science and art of the French Community of Belgium. Associate membership is granted for someone not residing in the country. 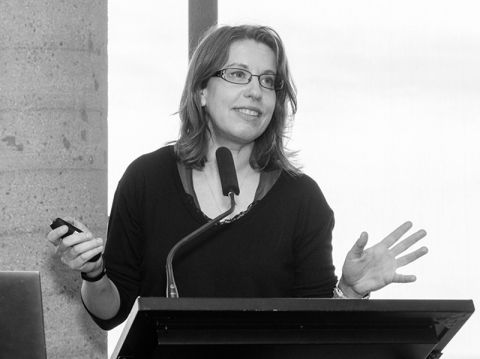 “It means a lot for me to be recognised in my country of birth,” says Aurore.

“The honour was totally unexpected. I was very pleasantly surprised.”

Aurore is a Professor of Statistics at The University of Melbourne, where she has been since 2007.

Aurore’s passion is to tackle challenging problems in the health sector. But she says statistics can be used for so many other problems, and that others outside of statistics are coming to realise that.

“Statistics is a discipline by itself now. It’s not just a branch of mathematics,” says Aurore.

“Our expertise is needed for problems in medicine, the climate, commerce, and so on.”

Aurore’s research includes the use of group testing to try to estimate the prevalence of a disease in population. Aurore also continues to develop new statistical methods in an area of research that she’s worked on since her PhD. Known as ‘measurement errors’, these are problems where researchers are not able to directly observe the data that could answer the questions they have.

In 2018, the American Statistical Association elected her as a Fellow. In 2020, the Australian Academy of Science did the same. This latest honour from her home country is a reminder of how far she has come in her career.

“To be recognised in the same group that includes some of the teachers who taught me at university is very special. I am so honoured to be included with them,” says Aurore.

Aurore has always believed in giving back to the statistical community, serving as an editor or associate editor for some of the most prestigious international statistics journals. She spent six years as the Executive Secretary of the Institute of Mathematical Statistics (IMS). In July, the IMS elected her to its Council. Aurore has also served as an Associate Program Chair for the 2017 Joint Statistical Meetings (JSM), the largest annual gathering of statisticians from the around the world.

Toutes nos felicitations, Aurore for this wonderful honour from your home country!