ACEMS PhD Student Alex Cooper takes home not one, but a pair of best student presentations at two major conferences.

“The ISF is quite applied, while MCM is more methodological and theoretical. However, I think it was of interest at both because my research touched on both theory and applications,” said Alex. 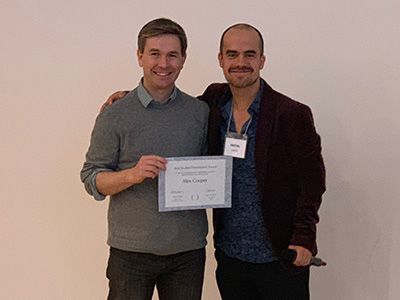 Alex’s PhD research is focused on developing and validating modern tools for the Bayesian analysis of complex problems, often where the size of the data set makes existing tools impractical.

Alex presented on the benefits of a specific Bayesian machine learning (ML) procedure to prediction problems in certain classes of time series models. The impetus behind Alex’s research is the well-known fact that it becomes computationally ‘expensive’ to implement Bayesian forecasts using conventional methods as the scale of the dataset increases. In other words, exact Bayesian methods take longer.

“It turns out, my research shows we can construct forecasts much faster. Also, as the data set gets large, our approximation errors become small,” said Alex.

“So we can construct forecasts that are just as good as those using exact Bayesian methods, yet are orders of magnitude faster.”

Alex is a PhD student with ACEMS at Monash University, in the School of Econometrics and Business Statistics. His supervisors are Dr Bonsoo Koo, and ACEMS Associate Investigators Prof Gael Martin and Dr David Frazier.

“With the pre-eminence of big data and machine learning in modern research, and life more broadly, it is of little surprise that the results obtained by Alex are of significant interest to a wide array of researchers and industry participants,” said David. “As evidenced by these awards, there is no doubt that Alex has the skills needed to be a top researcher in virtually any field in which he wishes to apply himself.”

Alex says this is truly an exciting time to be a forecaster.

“The discipline is experiencing a renaissance of sorts, as new statistical and computational methods from machine learning reinvigorate the field,” said Alex.

Both conferences had strong showings from ACEMS members, something that Alex said helped him out.

“Having friendly faces at these huge conferences really makes the conference experience easier, especially for a newcomer to the field like me. I was able to get to know some of them from earlier ACEMS retreats,” said Alex.

Alex is in his second year in his PhD, but has already made a big mark this year. Congratulations, Alex!