The Academy of Social Sciences in Australia recognises the growing importance of statistics and forecasting with the election of Professors Rob Hyndman and Gael Martin as two of its newest Fellows. 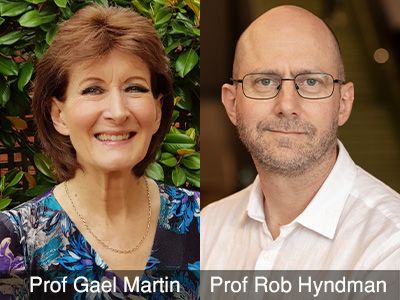 “I'm delighted to be elected a fellow of this prestigious Academy. As a statistician, my work is inherently multidisciplinary, so it doesn't always fit neatly into categories such as ‘Science’ or ‘Social Science’. Therefore, I'm delighted that the social scientists have seen fit to recognise the contributions of a statistician and a forecaster,” says Rob, who is a Chief Investigator with ACEMS.

For years, Professor Hyndman has helped companies and government agencies around the world forecast things like product sales, energy usage, and tourism. This year that has also included taking a lead role in helping forecast the spread of COVID-19 for the Australian Government.

“Thirty years ago, forecasting was not widely recognised as an academic discipline, and forecasting researchers trying to get their work published in the major statistical, and econometric journals often had a hard time. So, it is particularly gratifying that forecasting is now being more widely respected by the research establishment including the academies,” says Rob.

Gael’s primary research interests are in exploring statistical methods for complex dynamic models in economics and finance.  The development, application and validation of Bayesian simulation-based methods is central to her research, and she has made recent contributions to the growing field of approximate Bayesian computation, or ABC.

“My interest is not just in methods of inference and computation, but also prediction. My current work provides a new way of producing accurate predictions when the predictive model does not match reality,” says Gael, who is an Associate Investigator with ACEMS.

“This is most pertinent to the social and economic sciences, where statistical data arise through human activities and interactions that one cannot hope to adequately capture with a mathematical model”.

Gael says the broad scope of ‘social sciences’ reflects the multiple aspects of human behaviour and society. She believes the Academy recognises the increasing importance of statistics in these spheres.

“In these days of plentiful data and powerful computers, the ability to successfully model and predict aspects of human behaviour and interaction has been enhanced, and the role of statisticians has become increasingly important, and recognised,” says Gael.

“We often hear of the impact of ‘big data’ on many disciplines, and this is true, of course. But the role of open-source software has also made it possible for many researchers to analyse the data they are collecting. Without both the increased size of the data sets and the open-source software, the data-driven revolution we have witnessed would never have happened,” says Rob.

ACEMS now has four Fellows of the Academy of Social Sciences in Australia (FASSA). The Academy elected Deputy Director Kerrie Mengersen (QUT) in 2018 and UNSW Professor Robert Kohn in 2007. Just 38 new Fellows were selected in 2020.

“It is great to see the senior researchers in ACEMS being acknowledged in this way,” says Rob.

Rob and Gael also join six other FASSAs in their Department at Monash University. The Academy brings together more than 700 of the nation's leading researchers and professionals across the disciplines of the social sciences.