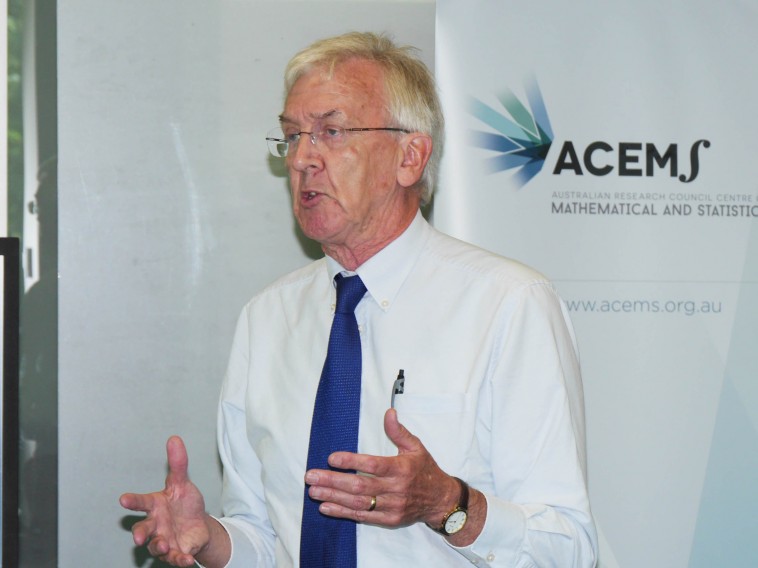 Members of the QUT Node for the ARC Centre of Excellence for Mathematical and Statistical Frontiers (ACEMS) gathered for a retreat to mark the end of the Centre’s first year.  Highlighting the retreat was a speech from Queensland’s Chief Scientist, Dr Geoff Garrett.

Dr Garrett told ACEMS members what it meant to be a part of a Centre of Excellence.

“It’s not just a question of being excellent in the mathematics and statistics research that we’re doing,” he said, “but excellent in the way we communicate, the way we work with other disciplines to get those ideas germinating and then, finally, how we translate it to create real impact.”

He challenged the group to “cross boundaries” and work with people and groups in other fields of expertise so that new ideas and solutions could be uncovered.

“This Centre of Excellence, I think, has got the ambition to work across boundaries and collaborate across Australia,” said Dr Garrett.

The day-long meeting featured more than a dozen members making presentations about the research they are doing.

ACEMS members also discussed issues like industry engagement, communications, and the long-term vision they’d like to see for the Centre.

One of the highlights of the day was a team-building challenge to build a tower using only dry pasta, tape, string and a marshmallow.

QUT is one of six ACEMS nodes around Australia, and is the second largest, only behind the University of Melbourne. More than 30 members attended the day-long event held on the QUT campus, including QUT’s five ACEMS Chief Investigators.