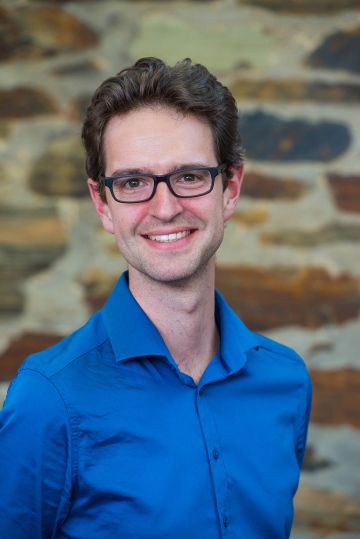 Lewis is a Senior Lecturer in Applied Mathematics in the School of Mathematical Sciences at The University of Adelaide. He studies how information moves over social networks using mathematical models, coupled with data science techniques.

“It’s a huge honour. ACEMS has been an integral part of my career and a central source of support for basically the entire time I’ve worked here in Adelaide, so I’m incredibly thankful,” says Lewis.

Just over a month ago, the Australian and New Zealand Industrial and Applied Mathematics (ANZIAM) group selected Lewis to receive its top award for early career researchers, the JH Michell Award.

Matt says he is excited to have Lewis join him as the other Chief Investigator in Adelaide.

“Lewis is one of the most exciting young researchers in Australia. His work uses serious mathematics and compute power to analyse the ever-moving social media landscape. I predict he will be a future star of Australian Science and Mathematics,” says Matt.

Lewis has been at The University of Adelaide since 2014 and has been an ACEMS Associate Investigator for most of that time. He hopes his new role as CI will allow him to provide more opportunities to the students that he supervises and mentors.

“I hope that I’ll be able to use this opportunity to support the next generation of researchers in ACEMS, and help this community continue on past the end of ACEMS as a formal Centre,” says Lewis.

“Lewis is exactly the sort of person who can make a great contribution to ACEMS at this stage of its evolution. He is an up-and-coming academic who works across more than one of the disciplines encompassed by ACEMS. I am very confident that he will continue to display the creativity and energy that has been characteristic of his career to date. In short, I am very happy to welcome him on board as a Chief Investigator,” says Peter.

For Lewis, his job doesn’t stop with researching, teaching and mentoring. As a scientist, he also believes strongly in the communication aspect of his work. Over the years, he’s written or co-written eight different stories in The Conversation. His research on social media happiness led to a big display for an exhibit at Adelaide’s Museum of Discovery (MOD). His outreach also caught the eye of the Australian Institute of Policy and Science (AIPS), which named him a South Australian Tall Poppy in 2018.

“I think it’s important for us as scientists to engage with the public, particularly on channels like social media. Talking about what we do, and what our colleagues are doing, and being representatives for our science is really important,” said Lewis.

Congratulations, Lewis on your new role. ACEMS is excited for the energy you’ll bring to it and our Centre.