OK, it wasn't that along ago - it was the 1970's. And it wasn't another galaxy - it was just "across the ditch" from Australia - in New Zealand.

That's when and where Karen Willcox first realised she was interested in the stars, in space travel, and in flying. That's because she had just seen Star Wars.

"I was and still am a huge Star Wars fan," said Prof Willcox. "So I often joke that Star Wars inspired me to think about aerospace and aerospace engineering and that's what got me into taking maths and science in school. Then, ultimately, engineering and it's what led to me being a professor, which is something I certainly never imagined."

Willcox is actually a professor of Astronautics and Aeronautics at one of the world's most prestigious universities - the Massachusetts Institute of Technology (MIT) in Boston. She worked for Boeing before that, and still collaborates extensively with the airline manufacturer. 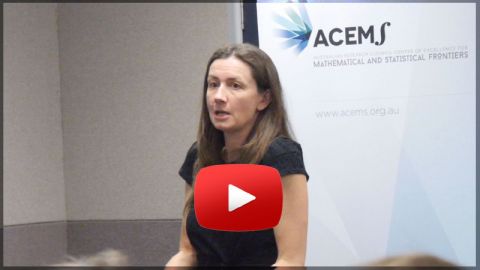 Willcox is on sabbatical this year, allowing her to spend a good deal of time in her hometown of Auckland, New Zealand. She's a visiting professor at The University of Auckland, but will return to MIT at the end of August. While she's on this side of the planet, Willcox took time to visit the ACEMS node at the Queensland University of  [KarenWillcoxYouTube] Technology (QUT) in Brisbane. Willcox was the plenary speaker at the ACEMS Workshop on Computational and Mathematical Foundations for Big Data Analytics.

"It's great to be focusing on this topic of big data and, particularly, the computational and mathematical foundations of big data which is such an exciting area," said Prof Willcox. "It has a lot of applications in my own area of aerospace engineering, as well as many other applications. Thinking about what the fundamental, mathematical and computational challenges are that span all those fields and talking with people who work with those different problems is really interesting. Hopefully it will lead to some productive research ideas and collaborations."

In our galaxy, in the not-so distant future, we could be seeing ideas that Willcox is working on right now. One such idea involves Boeing. She's collaborating with the aircraft giant on a blended-wing body aircraft. It's a concept for future airline aircraft where, instead of a fuselage with wings and a tail, there would be an integrated design where the fuselage and the wings would be blended together. Plus, the aircraft wouldn't have a tail.

"We're working with Boeing to try to take some of the methods we've been working on over the years," said Prof Willcox, "and incorporate them into a design tool that will let Boeing explore the design space early on. Particularly, to understand the effects of uncertainties and how those propagate through the decisions they make."

Willcox says the use of data to change the way things are designed and operate could have applications on not just airliners, but everything from drones to space systems.

"We're really thinking about the next generation of aerospace systems," said Prof Willcox. "Starting to exploit some of the opportunities with data that could be available is exciting. It means we have the opportunity to make our systems high-performance, more reliable, safer, cheaper, lighter, and to have less environmental impact."

VIDEO: PROF. KAREN WILLCOX TALKS ABOUT THE IMPORTANCE OF STEM EDUCATION FOR FEMALES

The future will have to wait, though, at least for a few more weeks. Willcox says she's actually been volunteering at a primary school in Auckland while she's on sabbatical. She's been teaching a science extension class on designing and building water rockets.

"There's nothing more fun than getting out in New Zealand, sometimes in the driving rain and mud, and having the children launch the water rockets that they've been designing for a few weeks. That's something that shows just how exciting maths and science can be."

VIDEO: WHY PROF KAREN WILLCOX LOVES HER WORK SO MUCH