ACEMS Chief Investigator Picks Up a Top Honour at JSM

The Committee of Presidents of Statistical Societies (COPSS) honours ACEMS Chief Investigator Aurore Delaigle with one of its top awards, the George W. Snedecor Award.

Prof Delaigle was presented the award at the recent Joint Statistical Meetings (JSM) in Baltimore, Maryland, USA. The award honours biennially a researcher who is instrumental in the development of statistical theory and analysis involving biological data. 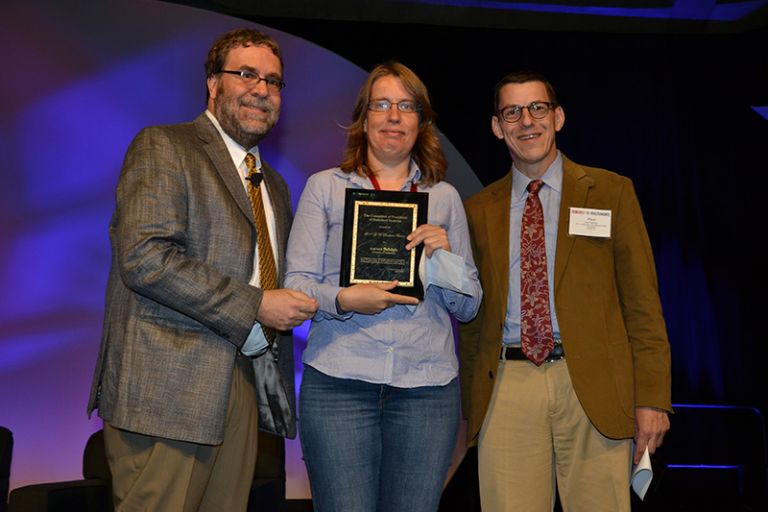 In this case, it was for a publication she co-wrote with ACEMS’ inaugural director, Professor Peter Hall, who passed away in early 2016. It was entitled, “Nonparametric methods for group testing data, taking dilution into account,” and appeared in Biometrika in 2015.

“This was one of our last collaborations, which makes this award even more special. The paper was accepted when Peter was in hospital and it made his day,” said Aurore.

“I loved working with Peter, not only because of his amazing theoretical skills, but also because of his passion and enthusiasm. He was always encouraging and often we were excited about the same problems.”

Aurore’s research centred around pooled laboratory samples, where the fluids (i.e. blood or urine) from a group of people are combined, and a single test is performed on the pooled fluid. This may be done because there isn’t enough money to perform tests on each individual or there isn’t enough time. By combining the samples, a positive sample, of say a disease, could be diluted by the rest of the samples which might be negative. Aurore’s research is about taking this dilution effect into account. She says the goal is to construct, using the grouped data, a nonparametric estimator of the probability of someone having the disease.

“I got interested in this problem by reading about a paper on the same topic, and I realised I could do better using the tools I know about deconvolution and measurement errors, which was the topic of my PhD. At some point, I got stuck proving a result I knew to be true. I knew Peter had worked on something similar before, so I asked if he’d help. Luckily, he did,” said Aurore.

In presenting Aurore the award, COPSS recognised Aurore for what it called, her “fundamental and groundbreaking contributions to the statistical theory of group testing of pooled laboratory samples, and for contributions to measurement error methods and density estimation.”

Aurore is a Professor and ARC Future Fellow at The University of Melbourne. She has been an ACEMS Chief Investigator since the Centre was formed in 2014. Aurore was also an Associate Program Chair for this year’s Joint Statistical Meetings.