Using Maths to Give Meaning to Social Media

There’s a lot of information in 140 characters. Just ask some members of the ACEMS team at The University of Adelaide.

They are working now to try to give meaning to all that information on social media – particularly Twitter – using mathematics, statistics and data science. 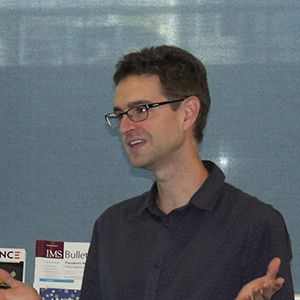 “This is a very interesting data set. It’s big data. But how much can you really use it, and to what extent can you trust it to predict real world events?” said Lewis.

Peter Mathews is a PhD student being supervised by Lewis. Peter is working on several projects that try to give meaning to social media data.  In April, he gave a talk about one of his projects at the “World Wide Web” International Conference in Perth. It’s the biggest internet conference in the world.

“I talked about my work on the distribution of retweet times, and provided a model which essentially explains how often people are pulling their phones out of their pocket or purse and checking their social media,” said Peter.

Peter found that previous statistical models for the distribution of these social media-checking rates are only valid for short times. By collecting data from Twitter and developing new stochastic models, Peter was able to explain the rates in terms of the importance people place on checking social media – low to medium. His results open the door to new methods for predicting how popular certain “memes” will become on social media. 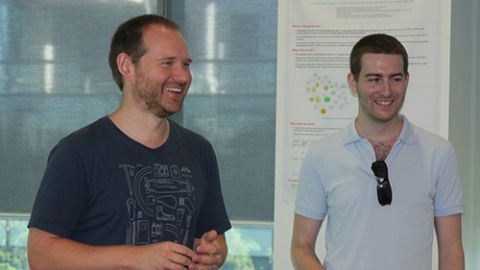 Peter is also looking into social media and event detection. For example, he’s developing mathematical and computer science methods for using social media to generate a synopsis of a sporting event, and show when significant things happened during that event. He’s also looking into estimating how long a social media discussion will last for certain events, and when it will run out.

Another problem with social media is that it’s biased. That’s what ACEMS PhD student Max Glonek is looking into.

“We’re looking into this idea that in social media, particularly in Twitter, people are presenting all this useful information that often is not available in other data sources. But the Twitter-using population is heavily demographically biased relative to the general population,” says Max.

Max says the twitter population tends to be younger, more focused in metropolitan areas, with a higher socio-economic status. There are also more men than women.

“So quantifying these biases is important,” says Max.

One area he’s looking into this problem is with election data. Max says he’d like to develop models to augment traditional election data so that it’s possible to generate more robust election predictions.

“There’s been some recent examples where traditional data said one thing was going to happen and then something else happened – Trump, Brexit, the UK general election a couple of years ago,” said Max.

These are just a few of the projects involving social media at ACEMS in Adelaide.

Lewis Mitchell is the common thread, though. For his postdoc, he ended up at the University of Vermont in the United States. He was embedded in a group at the university called the Computational Story Lab.

The group worked on, among other things, using Twitter data to measure happiness. The computer scientists call it ‘sentiment analysis.’ They developed a tool called the ‘hedonometer’ which uses statistical methods to measure in real time the happiness of the Twittersphere.

Lewis returned to The University of Adelaide in 2014 as a lecturer in the School of Mathematical Sciences and became an Associate Investigator with ACEMS as well.

As a lecturer, Lewis even uses Twitter to reach his students and encourage more discussion.

“You can’t use Twitter or Facebook or whatever because ‘it’s what the kids use.’ That wouldn’t work at all. You have to be genuine and actively engage with the people on the outside of those computer screens,” said Lewis.

In April, Lewis, Peter and Max travelled to Brisbane to meet with ACEMS members at the Queensland University of Technology (QUT). They’re hoping to lean on some of the expertise ACEMS at QUT has when it comes to Bayesian statistics, and to see how they can incorporate that into their projects. They’re also hoping some new collaborations could lead to more projects involving social media.