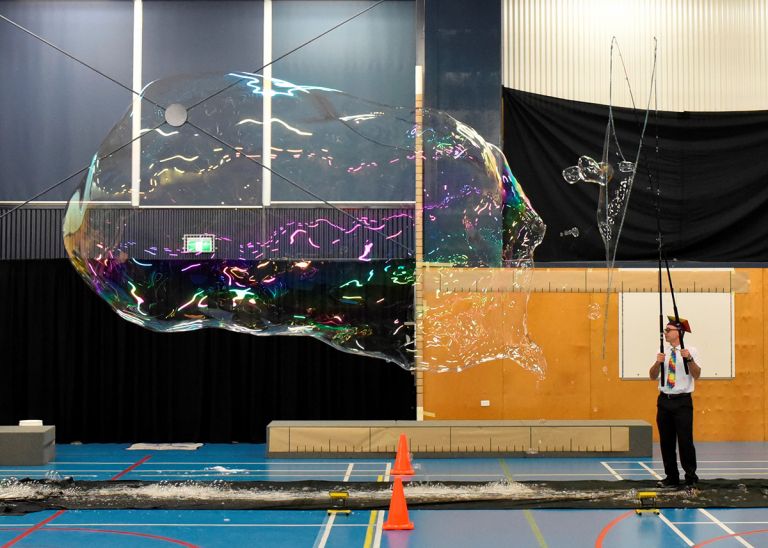 Graeme Denton, aka Marty McBubble, was confident he could break the old record of 8.5 metres³ with his soap bubble on a cool winter morning at an Adelaide primary school.

He needed to prove it, though.

That’s why he reached out to Professor Matt Roughan from the ARC Centre of Excellence for Mathematical and Statistical Frontiers (ACEMS) and The University of Adelaide.

Matt did all the mathematical modelling and calculations that showed that Graeme Denton’s soap bubble was 19.8 metres³, shattering the previous record.

“I thought it would be a fun project,” said Matt. “It turned out to be harder than I thought.”

Graeme and Matt went to a lot of trouble to make sure that they could accurately estimate the size of the giant soap bubble. The pair made huge scales that looked like giant rulers and laid them out on the floor and walls in the sports hall at Lockleys Primary School in Adelaide. Both Matt and  several other photographers then took pictures from several angles showing the bubble in relation to those markers.

Graeme knew he needed high humidity and cool temperatures to give the soap bubble its best chance. So he set out to break the record early on the morning on 19 June.

“That’s why I did it at six am, when the humidity was at its highest point. The air was also very cool and slowed down the evaporation of the bubble, which ultimately leads to the popping,” said Graeme.

With the conditions just right, and with everyone in place, Graeme got out his supersize wand made out of two 4-metre fishing rods and a long piece of string.  He then dipped the giant wand in his secret bubble recipe, and created the world’s largest indoor, free floating soap bubble. 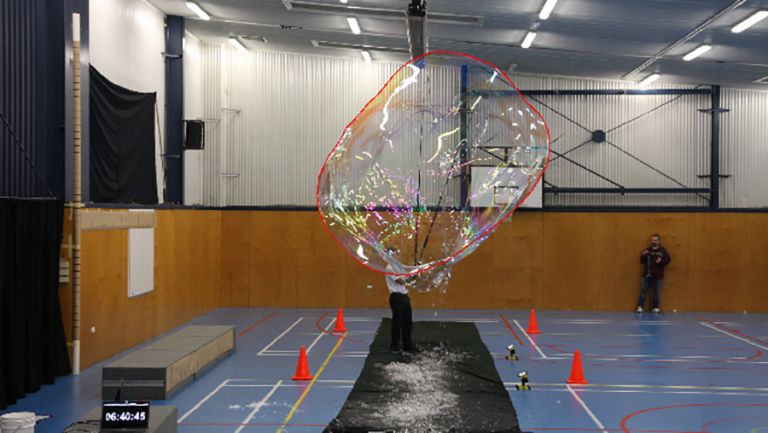 End View of Bubble. Red line shows shape of bubble. Prof Matt Roughan is on right side of picture

At least that’s what he thought. It was now up to Matt to prove him right.

Matt faced two mathematical modelling problems. The first dealt with the shape of the bubble. Small, free-floating soap bubbles will always be spherical.

“They’re mathematically interesting because they’re what we call a minimal surface. The spherical shape that encloses the bubble has a minimum surface area because of the surface tension,” said Matt.

The bigger the bubble gets, though, the more irregular the shape becomes. That was the case with Graeme’s giant bubble which evolved into something that almost looked like a huge sausage from the side.

The second mathematical problem Matt was facing dealt with correcting the perspective distortions from the cameras. For example, a picture of something that’s far away will appear smaller.

Matt said he did his own coding to make sure he understood all of his calculations. He also created a 3D version of his model bubble.

In the end, it took Matt about a week to finish his mathematical proof estimating the size of the bubble. Thanks to that, Guinness World Records have since verified Graeme’s bubble as the largest ever indoor, free-floating soap bubble.

Graeme started playing around with giant bubbles a couple of years ago while developing his educational show for kids as his character, Marty McBubble. The show is called “The ScientifiBubble Show” and is available to visit schools and centres across South Australia through Graeme’s business Bright Spark Entertainment.

“There’s a lot of science you can explain to children through the use of bubbles,” said Graeme.

He now knows there’s plenty of maths too.

Graeme had never met Matt before this project. He’s truly grateful for all the work Matt put into this.

“I had no idea how much work was involved for him. He did it in a much more thorough method than anyone would’ve ever done before with this record. I was very pleased to have him along,” said Graeme.

Graeme also gave Matt something to thank him for all his hard work – his secret recipe for making giant bubbles. Don’t try getting it from Matt, though. He says he won’t share it!