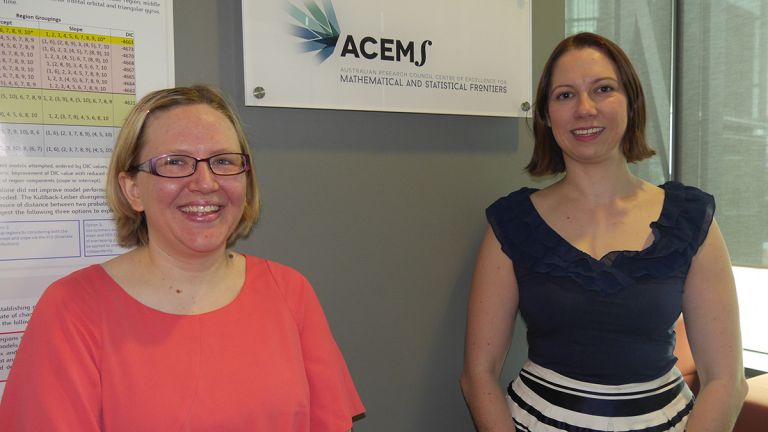 It’s one thing to dip your toes in the shallow end of a pool. It’s quite another though to jump head first into the deep end.

That might be the best analogy to describe the experience for two employees of the Australian Taxation Office (ATO), who just spent six months at ACEMS at QUT.

Sarah Hepworth and Jessica Michie recently completed secondments with ACEMS, and it’s quite clear that both didn’t waste the chance to expand their theoretical and applied statistical knowledge and do whatever they could to get the full ACEMS experience. That included taking part in ACEMS retreats, workshops, social networking and even massive open online courses (MOOCS).

“I expected to be immersed in statistics, and I was,” said Sarah, who is a data analyst with the ATO in Brisbane.

Both Jessica and Sarah said they came to ACEMS with the hope of improving their statistical knowledge to help with projects they were implementing in their work at the ATO.

“We’ve had a big reinvention program in the ATO and one of the key strategic focuses is using data in a better way,” said Jessica, who is a lead business intelligence analyst for the ATO. 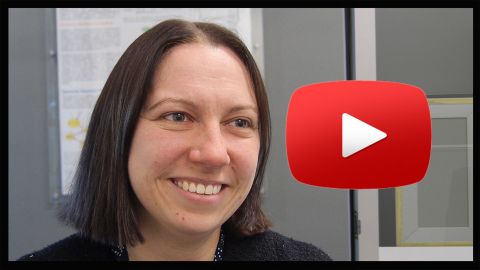 VIDEO: Sarah Hepworth talks about how ACEMS benefited from the ATO secondments

Jessica said she used her time at ACEMS to add to her statistical toolbox for her work at the ATO.

“It’s very easy getting stuck in what you know, and to go with one technique where you try to make every problem fit that one technique. Instead, we need to say, ‘this is our business problem,’ and then try to find the best technique for that problem. That’s where tapping into networks like ACEMS can be fantastic,” said Jessica.

Sarah said one problem she looked into during her time at ACEMS, dealt with record linking, or using mathematical and statistical methods for linking data sets. To do that, she collaborated with an ACEMS Chief Investigator at another university, Prof Matt Roughan at The University of Adelaide.

“He’s applying network theory techniques to treat each link between data sets as semirings, which is quite cool,” said Sarah.

Although physically positioned at QUT, the ACEMS network provided Sarah with the opportunity to not only work with many of the researchers at QUT, but also with ACEMS researchers at The University of Melbourne.

ACEMS Stakeholder Engagement Officer Jessie Roberts helped arrange the secondments with the ATO through the QUT Business School. Jessie says this initial trial with the ATO was a big success.

“We proved that the secondment format is an effective framework for building bridges with industry, particularly large organisations where data privacy can significantly inhibit research projects,” said Jessie.

“Jess and Sarah have a much greater understanding of the data, problems and organisational culture within the ATO than any external researcher will, so they can bring all that knowledge with them to ACEMS and trial out new approaches and strategies without compromising data privacy and security, which is paramount to many organisations.”

Having Sarah and Jessica around wasn't a one sided exchange, though. Their daily presence gave ACEMS researchers, particularly the post graduate students and early career researchers, on-the-spot exposure to people who work in government. Both agree the biggest value they provided to ACEMS was forcing the researchers they met to explain their research in a non-academic context.

“In government, you may need to explain a concept and not be able to use an equation. So to be able to translate your knowledge into something the business can understand and see the benefit of is really important,” said Jessica.

Both took part in a retreat earlier this year at The University of Queensland, for ACEMS postdoctoral researchers from around the country.

“We workshopped with them on how to pitch what they’re doing. Just having them explain to us what they’re working on was really meaningful,” said Sarah.

There was one more thing about the secondment that was really special to Jessica. It was part-time, which says helped her a lot because she has a small child at home.

“When you have roles that work better part time, they should be championed,” said Jessica. 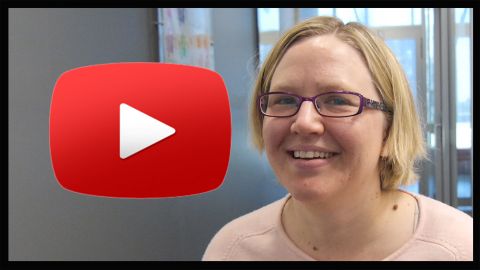 VIDEO: Jessica Michie talks about how her experience with ACEMS gave her renewed confidence in her maths skills

Jessica and Sarah's secondments with ACEMS were just one of several the ATO had with QUT.

“The secondee program helps build our staff's mathematical and statistical knowledge and to establish a network of contacts with experts. We see the knowledge and contacts as helping us provide better solutions to our business problems," said Rohan Baxter, a Senior Director with the ATO.

Jessie Roberts says she hopes this is just the beginning of ACEMS’ relationship with the ATO.

“We aim to host additional secondees from the ATO and explore a secondment into the ATO,” said Jessie.

“It’s great to welcome them into the ACEMS network as ACEMS Industry Affiliate Members, and we look forward to both seeing ATO staff at our workshops but also pushing forward on applied research problems.”

Moving forward, both Sarah and Jessica are moving into the data science area with the ATO. They want to continue to work closely with ACEMS as they do that.

“Both Jessica and I are really making an effort to promote ACEMS work and the value of the relationship back to the ATO so we can keep with working with ACEMS,” said Sarah.

They both hope that it leads to actual projects between the two groups that they can work on.

In other words, they’re already in the deep end of the pool... and they’re just getting warmed up!